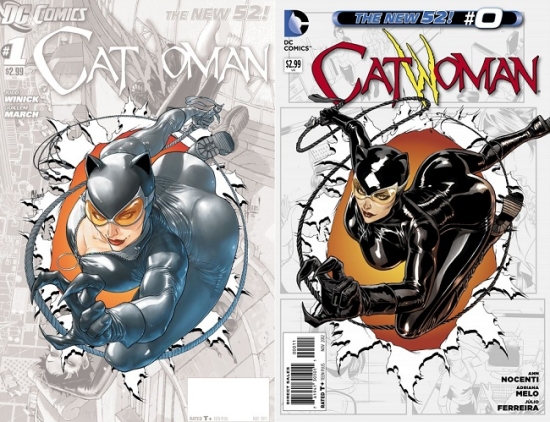 DC Comics hasn’t exactly been filling Catwoman fans with hope during its latest series. The first issue of the New 52 Catwoman run has become synonymous with everything people find despicable about the depiction of females in comics. It is within this fiasco that the cover for Catwoman #0 was born. After much Internet criticism, the cover has since been changed to a slightly less cringe-inducing version.

Both are by artist Guillem March, but the second at least conforms to some semblance of reality. That isn’t to say that this will calm the clamoring — which is justified — but it’s a step in the right direction. The changes between the two are minute for the most part but important.

Her body isn’t wildly out of proportion, for starters, and she’s even apparently grown a bit modest and zipped up. The position she’s in manages to include a number of body parts somehow absent from the first image, and her head isn’t painfully slanted. Overall, a lovely change to what was a disappointing cover.