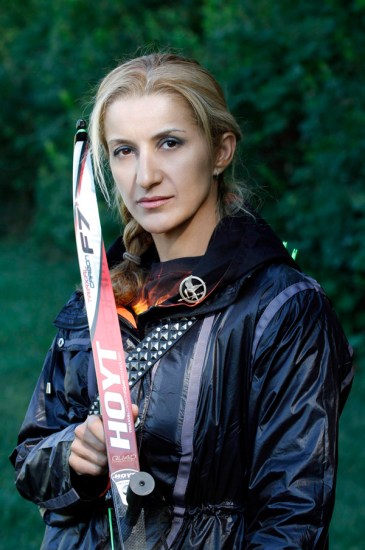 When Jennifer Lawrence took on the role of Katniss Everdeen in The Hunger Games, she not only took on the huge responsibility of keeping fans of Suzanne Collins’ series happy, she also had to make it look like she knew what she was doing. That’s where archer Khatuna Lorig came in. Lorig was in charge of training Lawrence (and did a fine job if you ask me) but she’s also a serious pro who competed at the London Olympics for the United States today. Read on to find out how she did!

A five time Olympian, Lorig attended a Hunger Games event in Hamilton, Ohio before heading off to the London games. There she donned Katniss’ trademark arena outfit to celebrate the upcoming release of The Hunger Games on blu-ray, DVD, on demand, and digital download on August 18, 2012. Besides training for the Olympics, she’s also a certified Level II archery instructor.

According to her Twitter profile, Lorig is a “Bronze Medalist from 1992 Summer Olympics. 2012 National champion, 2012 Olympic trials silver medalist.” The BBC writes, “She is the only athlete to have represented three teams in the Olympics – first representing the United Soviet Team in 1992, where she won the bronze medal. In 1996 and 2000 she competed for her home country of Georgia, and in 2008 she represented the US in Beijing.”

But how did she fare in today’s competition? Unfortunately not as well as she’d hoped. Lorig just missed taking home the bronze in the women’s individual competition. “South Korea’s archery dominance continued in London as Ki Bo Bae narrowly edged Mexico’s Aida Roman in a shoot-off to win the country’s seventh gold in the last eight Olympics,” reports the Washington Post. “Trailing 4-2 going into the fourth set, Lorig hit a 10 so perfectly centered that it hit the camera hole and bounced off the target. Avitia followed with a 7, and Lorig had an opening. She followed with an 8, and Avitia answered with a 9. But Lorig’s third arrow was a disastrous 6, giving the bronze to Avitia.”

Lorig has of course spoken about her time working on the Lionsgate film and its star. “We had an awesome time together,” Lorig said to the News Observer of Lawrence. “We teased each other a lot. I kept saying, ‘You’re a movie star,’ and she kept saying, ‘You’re a five-time Olympian.’ It was awesome. She was a very good student.”

Before today’s competition Lorig said, “Yeah, there are nerves, but if I miss, I’m not going to die. This is my fifth Olympics. You just shoot your best shot, try to make it as best you can, and hope for the best. Maybe the wind blows, maybe something happens, you can only control what you can control.”

So, you know, exactly the opposite of The Hunger Games. And in case you were wondering, archery runs in the family. Lorig’s 19-year-old son, Levan is looking to enter the 2016 Olympic games.

“Absolutely there has been more attention to our sport since The Hunger Games came out,” Lorig said. “We have a great sport, a unique sport, and it deserves this recognition. Hollywood is bringing archery out to the open more, and a lot of kids are loving it. I think it will be great if more kids start the sport, keep them off the street.”