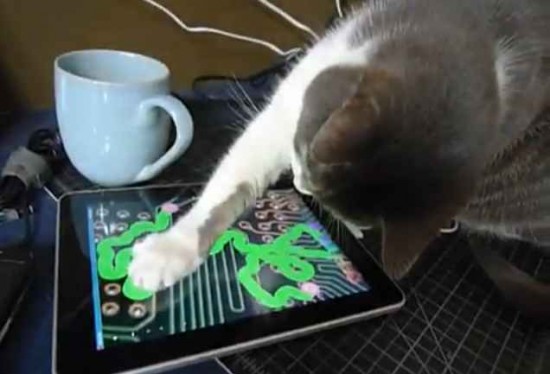 Today in technology news: cats — or at least one cat — are apparently very intrigued by the iPad. Eric Rautio‘s cat, Iggy, is entranced by the iPad apps Noby Noby Boy and Magic Piano [warning: Apple Store links], so much so that he gets into playing them, with his paws. Rautio says that the iPad screen is fine, though: “cat’s claws are not as strong as glass.”

As with the 2.5 year old vs. iPad video of Todd Lappin‘s daughter, this can be taken as yet another test of people’s sentiments about the iPad: Is it so simple and intuitive that even a cat finds it appealing and can interact with it,* or is it so dumb, it works as a cat toy? Alternatively: Just a funny video of a cat playing with an iPad.

*: Some guy said something interesting to that effect on Twitter about the baby vs. iPad video — I think it was Jeff Jarvis but I’m not sure. In any event, h/t that person.