Carnivorous Plants Host Ecosystems In Their Guts | The Mary Sue 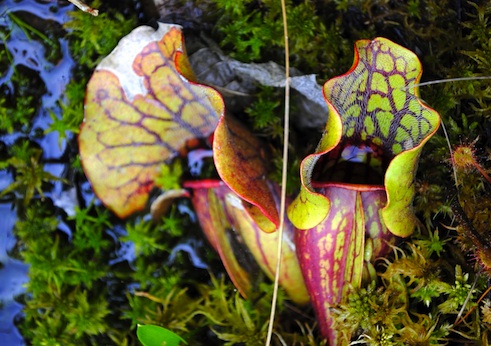 While carnivorous plants may seem rather strange and exotic, the principles that underlie the insect-eating pitcher plant are pretty simple — bugs fall down the slick sides of the tube shaped plant, landing in a small pool of water where they drown before being digested and turned into plant food. A new study by researchers at Harvard, though, suggests that the plant’s methods are anything but simple, though. According to a recently published paper, the pools of water in pitcher plants are teeming with life, and represent miniature ecosystems unto themselves.

We’ve brought you a look at the slip and slide plant walls that make pitcher plants such deadly insect traps before. Once its prey is caught, though, a new study in the journal Oikos finds that the plant’s work is largely finished. When a bug is in the water, the work of digesting it is outsourced to the plethora of microscopic creatures that call the pitcher home, a fully functioning ecosystem writ small.

A survey of more than 60 pitcher plants from bogs all around North America found up to 35 different varieties of organisms that live within the pitcher’s water pools, ranging from bacteria to fly larvae to multi-cellular algae. Many of these animals form what researchers called a “processing chain” that was common within the plants, a string of microscopic interactions that allow the plant to draw sustenance from the animal it has trapped — after all, without things like teeth or internal organs, getting the most out of a meal can be difficult.

That’s why a pitcher hosts tiny animals like midges larvae, which will descend upon a drowning insect and consume it, shredding it into smaller pieces. Bacteria in the plant eat the smaller pieces, and tiny aquatic predators known as rotifers eat the bacteria. It’s only then that the plant gets its long-awaited meal, absorbing nutrients from the rotifers’ waste. Beyond this processing chain, though, there are plenty of creatures in the plant’s pool that are there not because they’re helping out, but for no other reason than they can make a living there. Even in the humblest corners of the animal kingdom, it appears, you go where the work is.

Researchers hope to use the food web microcosms they’ve discovered in the pitcher plants to learn more about how food webs become established in larger ecosystems like ponds and lakes.

(via Oikos, image courtesy of Harvard)