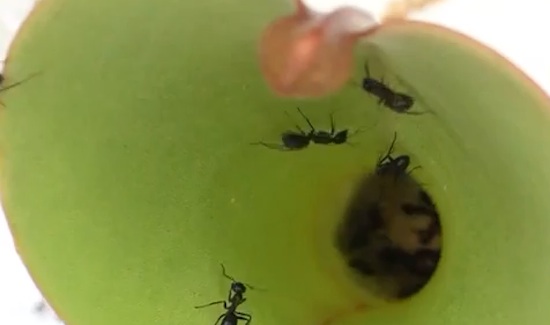 Wondering what the most fun way to be gruesomely devoured alive is? Wonder no more. Microscopic hairs coat the surface of carnivorous pitcher plants, and when those hairs get wet, watch out —  just a little rain can turn the plant walls into water slides for the insects the plant preys upon, sending them careening helplessly down into the stomach of the plant. You can see the slippery slide in action in the video below, as ants crawl adeptly over the dry plant, but drop helplessly into the wet one like characters in a Benny Hill sketch.

Most plant hair are built to repel water — on the pitcher, though, the hairs are built to draw water in, leaving the sides of the plant so slick that even sticky-footed animals like ants and beetles can’t gain the traction they need to escape a fate worse than death — being swallowed alive by a terrifying, meat-eating plant, followed gradually by death.

This latest research, published this week in the journal Proceedings of the Royal Society B builds on observations made by Dr. Ulrike Bauer earlier this year in a paper published in the journal PLOS ONE. That paper focussed on the plant’s ability to capture prey by catapulting it into a pool of water in the plant’s guts, drowning prey before digesting it. It seems the pitcher plant is no one note hunter, though, and has at least a couple tricks up its gaping maw. Personally, we can’t wait to see these things develop tentacles, because you know, we have no interest in ever sleeping soundly again.