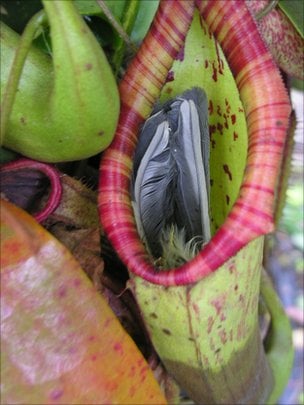 Carnivorous plants are one of nature’s most fascinating, disgusting, and terrifying forms of life. These killer plants often devour insects, small amphibians and reptiles, mice and even sometimes rats, but now, a hungry bit of flora in the UK has consumed a bird. It is believed to be only the second time in history that a plant like this ate a bird.

The plant is a pitcher plant from the genus of Nepenthes which are found traditionally in South East Asia. The poor bird, which met an untimely demise, was a blue tit. The plant is located in a garden nursery, under the care of Nigel Hewitt-Cooper, who was making his rounds in the tropical garden when he discovered that the pitcher plant had trapped the bird.

“I’ve got a friend who’s studied these particular plants extensively in the wild and he’s never found evidence of any of them having caught birds.”

According to Hewitt-Cooper, it is possible that the bird was attracted to the plant due to the insects that land on its leaves and become trapped. If the bird had leaned into the plant to pull out an insect that was floating in the fluid inside, it could have become trapped inside the plant.

It is believed that the only other documented case of a pitcher plant eating a bird was in Germany several years ago, but it is certainly not the only case of one strange organism consuming another. If this plant-bird incident, this waterbug eating a baby turtle, or this snail eating a worm shockingly fast are any way to gauge, it’s safe to say we live in an anything-eat-anything kind of world.