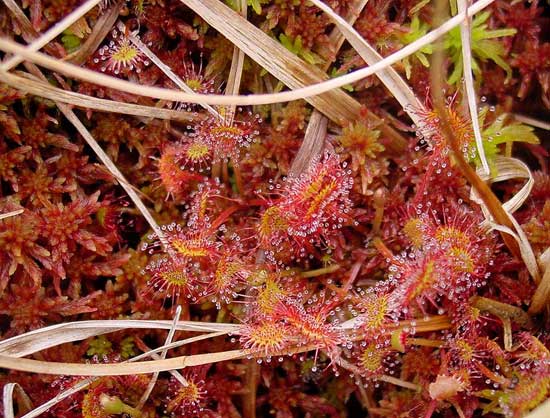 When it comes to bug-eating carnivorous plants, nitrogen has generally been thought as the root of it all. In areas where nitrogen or other nutrients are tricky to find, some plants develop traps and pitfalls in order snag other creatures in order to make up for that detriment. Now, a study looking at the common sundew in the bogs of Sweden suggests that manmade nitrogen pollution is making these predatory plants go vegetarian.

In the study published in the journal New Phytologist, lead author Jonathon Millet and his team looked at various isotopes of nitrogen in bog plants — some of which distinctly came from the soil and others which came from insects. To determine where the plants were getting their nitrogen, Millet’s team gathered several samples of carnivorous sundews and non-carnivorous mosses from the same bog. By comparing the nitrogen isotopes found in both, they were able to determine the proportion of nitrogen that the plants were receiving either from the ground or noming on flies.

In areas that the team determined were “lightly” polluted with nitrogen, the researchers found sundews getting 57% of their nitrogen from insects. In more heavily polluted areas, the plants were receiving as little as 22%.

It all comes down to an economy of energy. In the nitrogen poor areas, it makes sense for plants to invest their limited energy from food and nutrients to build complex insect traps. These traps — in the case of the sundew, sticky leaves and an insect-attracting red coloration — require more energy than just photosynthesizing leaves but snag valuable nutrients that the plant can’t normally get. It now seems that when those nitrogen requirements are being met or exceeded, the plants can throttle back their trapmaking and save that energy.

The culprit, the researchers believe, is the burning of fossil fuels which has consequently increased the amount of nitrogen in the atmosphere. The nitrogen is in turn dissolved into rainwater, and deposited into the ground.

In the short term, Millet writes that this is making the sundews larger and heartier, and also greener as the plants appeared to actually have changed their color scheme in order to attract fewer insects.

This sounds like it would be great news for the sundews, but Millet believes that this won’t work out for the plants in the long run. He believes that because they have evolved to a certain niche, they won’t be able to compete with other plants as the region becomes more and more saturated with nitrogen. After all, the plants are bug-eaters, and have a limited capacity to adapt in such a short time. From PhysOrg:

“In the sites with more nitrogen deposition, these plants now get much more of their nitrogen from their roots, but they still have to bear the residual costs of being carnivorous, and other plants without these will be better able to survive,” Millett comments. “So it’s quite likely we’ll see less abundance and perhaps local extinctions from carnivorous species. The individual plants get bigger and fitter, but the species as a whole is less well adapted to high-nitrogen environments and will lose out over time.”

Of course, this is one study from one area. However, Millet is now turning his sites to northern England where he believes that the bogs experience nitrogen pollution nearly 30 times greater than in Sweden.

The long-held rule about “too much of a good thing” holds true for plants as well.

(via PhysOrg, New Phytologist, top image of a sticky sundew via Wikipedia)