Save the Date: The Captain America Sequel to Be Released in April 2014 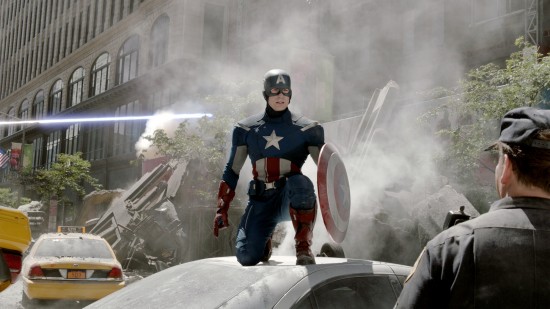 We know there’s a short list of directors for the sequel to Captain America: The First Avenger (that is not The Avengers), but now we can officially say that we’ll be seeing this movie in less than two years: Marvel and Disney have announced a release date for Captain America 2, and it is April 4, 2014! See? Less than two years! I was totally not joshing you!

Obviously, this means that Steve Rogers/Cap makes it through The Avengers (a new still of which was also released and appears above), so that’s great news for Chris Evans, who is obviously going to continue playing the role. But here is the real development, considering we first met Mr. Rogers back in the 1940s: the sequel will take place in the present, following the events of The Avengers. From the official announcement:

The Walt Disney Studios has announced a release date for Marvel Studios’ sequel to the blockbuster Captain America: The First Avenger on April 4, 2014. The second installment will pick-up where the highly anticipated Marvel’s The Avengers (May 4, 2012) leaves off, as Steve Rogers continues his affiliation with Nick Fury and S.H.I.E.L.D and struggles to embrace his role in the modern world.

However, there is some speculation that despite the “modern world” thing, we might still go back in time to the ’40s via flashbacks. This is, apparently, the desire of the screenwriters of the first movie, Chris Markus and Stephen McFeely. And not only would they like to go back to the World War II era, but they’d also like to introduce Sharon Carter, a niece of jilted love interest Peggy Carter (Hayley Atwell) and an agent of S.H.I.E.L.D.

But one question this announcement can definitively answer is that Captain America 2 is one of Marvel’s “mystery movies” being released on one of the two dates they reserved without actual titles. The other date, May 16, 2014, has yet to be announced.