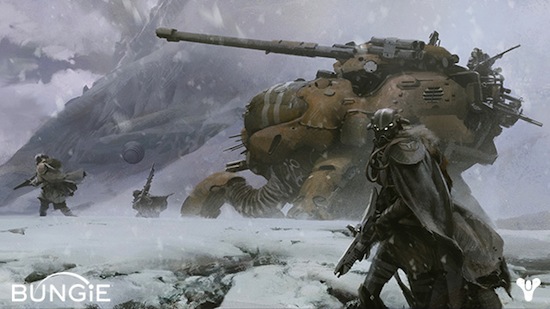 Put down Halo 4 for a minute and look at this. Someone leaked art and other assets from Destiny, the next video game from Bungie. The documents were leaked to IGN and confirmed by Bungie to have come from an advertising agency. In response to the leaked art, Bungie went ahead and released the above image to show off what they have in the works. Along with the leaked images, the documents included some details about the story of the game. Potential spoilers ahead, folks.

The story takes place 700 years in the future in the Last City on Earth. In the sky over the city is a giant alien ship known as “the Traveler,” but the only thing anyone knows about it is that it is supposedly there to help. The players are “knights” who protect the city from invading alien monsters. The main mission of the game seems to be centered around finding the source of the alien invasion and putting an end to it.

The leaked document says Bungie wants to make the universe of the game “as deep, tangible and relatable as that of the Star Wars franchise.” That’s a big goal, and to meet it they’ll have to broaden their appeal. There’s been no official word about the game being MMO, but that hasn’t been ruled out either. The gameplay is described as being “social at its core.”

The violence may be toned down compared to Halo as well. Jason Jones, Bungie co-founder, said “Destiny is designed for your inner seven-year-old.” Generally we don’t associate seven-year-olds with ultra-violence, and to bring in Star Wars level fans, the game would need to be accessible to younger players.

There are still many unknowns about the game, like its release date, or anything else about it besides these images and story synopsis. One image in the documents included a logo with the Earth, “the Traveler,” and the word “Destiny,” so it looks like that will be the official name, and not just a working title as had been suggested.

(via IGN, image via Bungie)