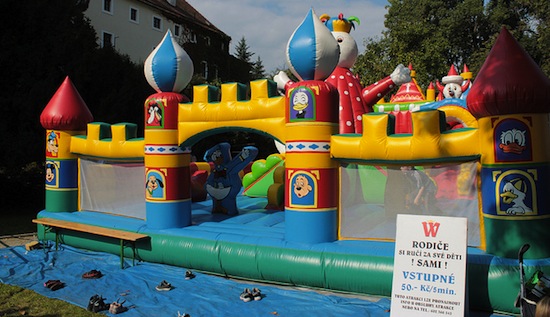 They may have been stuffy, reeked of vomit, and adorned with the bootleg visages of iconic cartoon characters, but thousands of folks have experienced the kind of childhood joy that only comes from a day spent in an inflatable bounce house. Perhaps the lot of us have just being blinded by nostalgia, because a recent study has shown that bounce house injuries increased 15-fold between 1995 and 2010 and will most likely continue to grow, reminding us that they were nothing but inflated houses of rubber built on our pain and tears.

In the report, approximately 64,657 children under the age of 18 ended up in the emergency room due to such injuries as head-on collisions, fractures, falls, and sprains. Alarmingly, there were four deaths in relation to bounce houses over a four year period between 2003 to 2007, mostly as a result of their heads making contact with a hard surface.

While bounce houses are no doubt death traps designed to grind any block party or birthday bash — no pun intended — to a screeching halt, they’re still a cultural institution that cannot be taken away entirely. To appease opposing sides by meeting them in the middle, experts suggest that precautions be made when planning on purchasing or renting a bounce house. Constant adult supervision, occupancy limitations, and a maximum age limit are advised to be put into effect to avoid any future disasters, because we all remember that one big kid who was way too old to be in there that would send everyone flying.