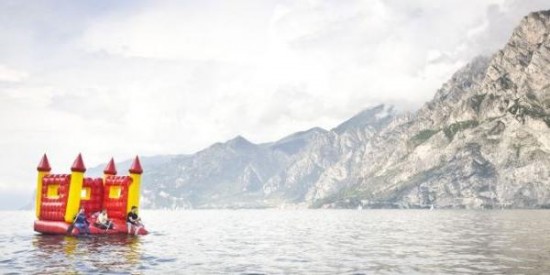 Was there always something you wanted to do as a kid, that you later realized was kind of unfeasible?  Personally, I wanted a tree house with television, and of course no bugs anywhere in it.

These three twenty something British dudes wanted to sail a bouncy castle across a lake.  So, they did, and took a video.

Their makeshift craft carried them a leisurely five miles across the largest lake in Italy.  Hijinks ensued when the castle, driven by paddles but mostly by wind, meandered its way into the path of an international sailing regatta.  The police nicely helped out by warding away the racers.  One of the sailors (castleors?), Chris Hayes, had this to say:

Great Britain has such a great tradition as a seafaring nation and we really feel we have played no role at all in adding to this… That said, it was possibly the most fun we have ever had and we really never believed this most frivolous of dreams would ever be realised.

I think I’m going to put a library in that treehouse, with one of those rolly ladders.