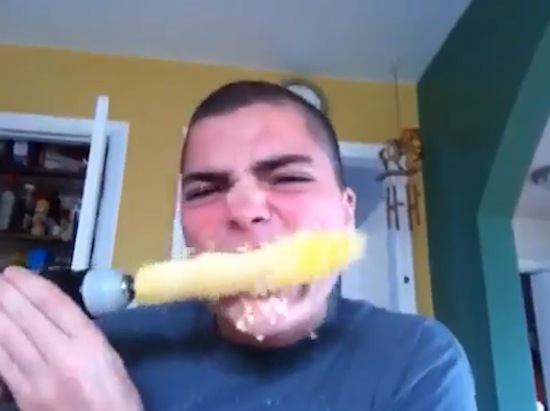 Every day it seems like our lives are only becoming more and more fast-paced. We no longer have the luxury to stop and truly savor life’s simple pleasures. Chief among them being the enjoyment of some damn fine corn on the cob. So what is one to do when they’re strapped for time, but they also want to chow down on some golden corn on the cob goodness? There is a solution, folks, and all it takes is said corn on the cob, a power drill, and a tolerance for pain.

While we commend him for his culinary ingenuity and willingness to endure palpable discomfort for the sake of what may very well be considered a revolution in the consumption of corn, there has to be a better way of doing so that doesn’t involve stripping the top layer of skin off one’s face or causing irreparable damage to the incisors. Still, like they always say, at least he tried. Perhaps he should hit the drawing board again, though.

corn on the cobfoodpower drill