Hacked Bop It Can Slow Down For Kids, Speed Up For Masochists 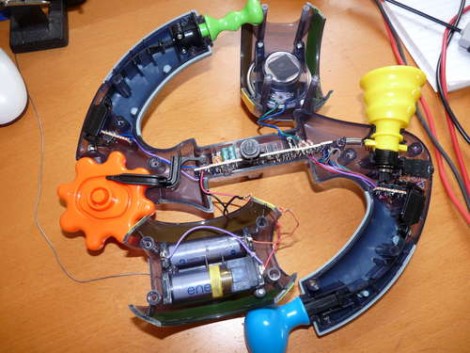 Johnny Halfmoon has both a Bop It Extreme and a son. When he noticed that one had developed a significant interest in the other, he wanted to foster the important relationship between his boy and his Bop It. The problem? The Bop It was constantly outpacing the boy. The solution? Hardware hacks. Johnny disassembled his Bop It and added a switch that allowed him to toggle between the Bop It’s standard axial resistor and a potentiometer, so that now, he can adjust the speed with a screw driver.

Clearly, the goal was to slow it down enough for his son to play, but the added bonus is that it can now be sped up for players on meth, or players with 4 hands. The other added bonus, as you might expect, is that speeding up or slowing down the Bop It also pitches the voice up or down. At super speed you play with a chipmunk, and at slower speeds you get to play with Satan. Hopefully it won’t give his son nightmares.