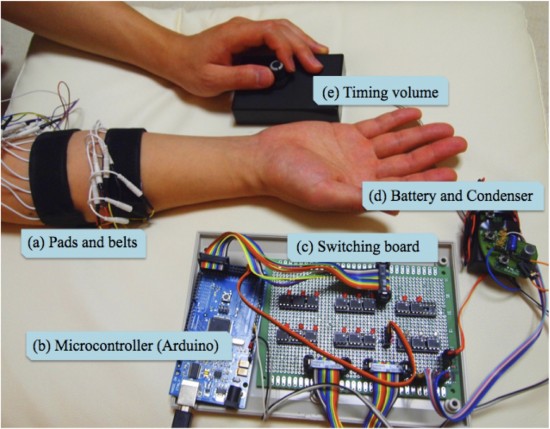 So you want to play guitar like Jimmi Hendrix or Carlos Santana, but you just don’t have the skills? Don’t worry, the Japanese have a solution for you. PossessedHand, is a device being developed by the University of Tokyo, and Sony Computer Science Laboratories, that can move your fingers into the proper positions to play musical instruments. The device electrically stimulates the muscles in the forearm that play a role in moving the fingers, without the users mind instructing the hand to move.

PossessedHand consists of a belt, worn around the user’s arm that contains 28 electrode pads. These electrodes flex the joints in the hand, including the joints that enable the fingers, thumb and wrist to bend. Though information about the exact mechanism is spare, it seems as though electrical impulses stimulate the muscles in the forearm, which power the movement of the connective tissues (tendons and ligaments) that allow the joints in the hand to bend.

User’s are aware that their hand is moving, however they do not have control over how it moves. Unlike other devices that use electrodes to control hand movements, PossessedHand is non-invasive and doesn’t require the electrodes to be embedded in the skin.

Calling it a hand hijacking, the researchers took control of a subjects hand and tried to teach it how to play the koto, a traditional Japanese instrument. The koto is played by wearing picks on three different fingers, and plucking the strings with all five fingertips to produce a unique sound. A koto score tells the musician which fingers to move and when, which allowed the researchers to create instructions for their device, telling it when and how to stimulate the wearers’ joints.

While the device did not generate enough force to actually pluck the strings of the koto, it did move the fingers in the correct order. This could be useful for novice musicians as a way to learn the correct finger movements. However, whether there will be a market for such a device remains to be seen. Users were reportedly disturbed by having their hand hijacked, saying that it felt like their bodies had been hacked.

Despite some wariness on the part of users, the researchers are confident the device will catch on. It could be particularly useful for rehabilitation in people who have suffered a stroke or other illness or injury that impairs muscle control. Electrical stimulation of muscle is already used in rehabilitation, but a non-invasive device that could control precise movements would be useful.