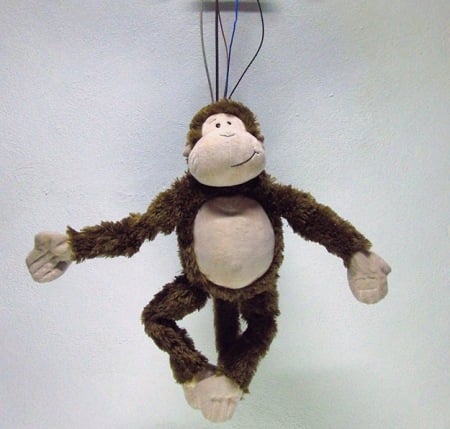 Hack a Kinect and then use it to read your movements and make a monkey copy them: It’s an idea so simple and cool that you’re kicking yourself for not having come up with it. Or you did come up with it and you’re kicking yourself for not doing it. Either way, Jan Sieber and Ralph Kistler did do it and it’s both an awesome toy and an awesome play on words.

The way it works is that the Kinect reads and records the user’s body movements and the software translates them into commands that are sent to the poor monkey’s nightmarish skeletal implant made of metal, servos, and wires. Even through all that, the monkey seems to have been able to keep that little smirk on his face and will gladly do jumping jacks with you.

Video after the jump shows the monkey in action, explains the process of creation and personifies the little guy so much that the scene in which his innards are removed and replaced is genuinely disturbing. Enjoy!

(Hack a Day via Technabob)