Microwave Hack Displays YouTube Videos on the Door While You Wait 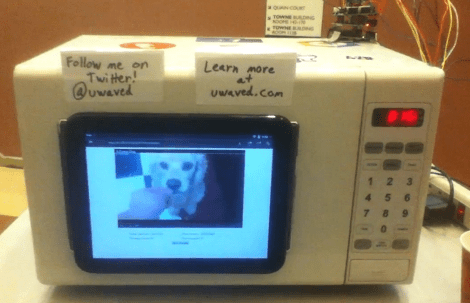 Everyone has watched the food spinning in the microwave at one point or another. Granted, it’s different with every food, but the plot of that show tends to be a little formulaic. And that’s the problem the μWave sets out to solve. The μWave, created by the University of Pennsylvania students for the 2011 PennApps hackathon is way more sophisticated than your average microwave and provides a whole bunch of trivial, but awesome features. The main one is that when you type in a time, the μWave goes out and finds a YouTube video of an appropriate length for you to watch while you wait.

In addition to showing you a video, the μWave also has it’s own Twitter account, will tweet about the fact that you are using it (not sure if I like the idea of that) and it can also text you when your food is done. That last feature especially kind of clashes with the “watch a YouTube video while you wait” idea, but functionality is functionality, right?

Now this is a pretty hacked together device and just uses an Arduino and a unmodified tablet, but the idea is pretty interesting. How long will it be until we have screens on everything? I mean really, this isn’t much further out there than the smart fridge or the smart mirror. All that being said, I kind of like the spinning food channel; it’s the one time I get to watch something that makes me hungry and then actually eat right afterwards.