Science: “Goo” In Bones Prevents Them From Shattering

Now my Skeleton Army will never be defeated! 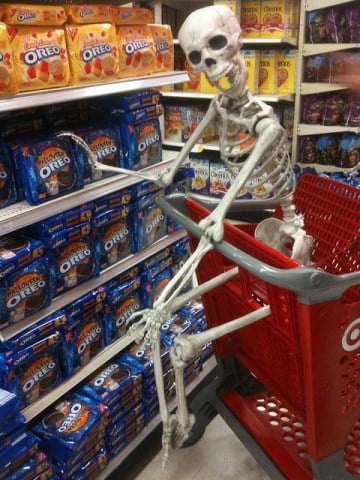 Many of us have broken a bone in our lifetime, but few people are unfortunate enough to shatter one–and new researchers say that’s all thanks to goo. Goo in your bones. Bone goo, that is.

Researchers at the University of Cambridge recently published a study in the Proceedings of the National Academy of Sciences that claims the mineral content of bones exists in a liquid form and absorbs the shock of small movements. The viscous lube is made up of water and citrate, and relieves pressure on the nanocrystals in our bones to prevent them from shattering. I’d like to say that having a body full of essentially putty excuses my inability to do push ups for shit, but I’m pretty sure that’s not how humans work.

But what we’ve shown is that a large part of bone mineral – possibly as much as half of it in fact – is made up of this goo, where citrate is binding like a gel between mineral crystals. This nano-scopic layering of citrate fluid and mineral crystals in bone means that the crystals stay in flat, plate-like shapes that have the facility to slide with respect to each other. Without citrate, all crystals in bone mineral would collapse together, become one big crystal and shatter. It’s this layered structure that’s been missing from our knowledge, and we can now see that without it you’re stuffed.

Duer and the Cambridge team found that without goo the bone’s calcium phosphate nanocrystals merge and become fragile–an insight that will hopefully prove useful in fighting osteoporosis.

In the meantime, at least we now know what happened to the aliens in Kingdom of The Crystal Skull. Tragic lack of goo.

(via Gizmodo, image via Mike Mozart)