Screws Made From Silk Could Be The Future of Broken Bones

Sorry, vegans, guess we'll have to keep drilling this metal into you like it's the 1800s. 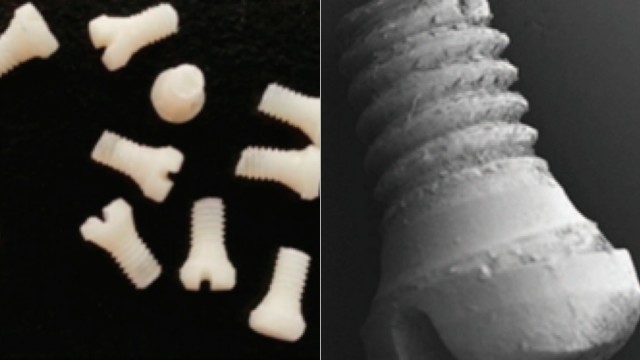 Good news for skeletons: researchers have developed biodegradable screws that strengthen bones, prevent infection, and minimize many of the risks in orthopedic surgery. Also they’re made from silk, so get ready to become a race of super-fancy worm people.

Samuel Kaplan of Harvard and David Lin of Tufts published their findings yesterday in Nature Communications, revealing that after testing on rat femurs (coincidentally also the name of their grunge rock band,) they have developed screws to “be self-tapping, remain fixed in the bone for 4 and 8 weeks, exhibit biocompatibility and promote bone remodelling.”

The team’s  findings indicate that silk could be a surprising solution to many problems inherent in orthopedic surgery: silk screws are strong enough that surgeons wouldn’t need to drill a hole for insertion, they biodegrade over time so that bones can regain strength, and they won’t prohibit users from going through the metal detector at airports (bummer.)

For their tests Kaplan and Lin used silk from silkworm cocoons that they  dissolved in alcohol and poured into screw-shaped molds, possibly while listening to Enya and thanking the moon Gods for the bountiful worm harvest, because that is how the word “cocoon” makes me feel.

On rat test subjects the silk screws were even invisible during X Rays. Explains Lin, “Because the silk screws are inherently radiolucent [not seen on X-ray] it may be easier for the surgeon to see how the fracture is progressing during the post-op period, without the impediment of metal devices.”

The team also predicts that silk screws could be used to deliver medicine that fights infection or promotes bone growth.

Says Kaplan, “One of the other big advantages of silk is that it can stabilize and deliver bioactive components, so that plates and screws made of silk could actually deliver antibiotics to prevent infection, pharmaceuticals to enhance bone regrowth and other therapeutics to support healing.”

Lin and Kaplan plan to start putting their advancements to work in facial reconstruction surgery, and Gizmodo reports that clinical trials will hopefully begin soon.

So if you’re planning to break a bone sometime in the nearish future, the screws in your body may have a higher thread count than the sheets on your bed. Or maybe that’s just me?