Being an Insomniac Could be Bad for Your Bones 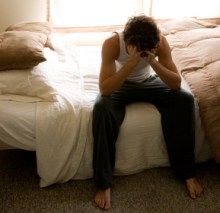 A team of scientists led by Carol Everson at the Medical College of Wisconsin have found that rats regularly deprived of sleep suffer from both bone and bone marrow issues directly related to said lack of sleep. Has science found that staying up all night watching Netflix is bad for your skeleton?

The observed rats underwent sleep restriction during a period of their young adulthood, and Everson’s team found seemingly dire results. Not only did these rats experience a negative change in bone formation, but also the fat in red marrow was largely reduced, while cells that create platelets were increased in number, changing the overall plasticity of the marrow. That may not sound as dire as it could be, but Everson makes it more clear, stating that if the same processes carry over to humans, it could create “poor repair of microdamage from activities of daily living,” and could “change progenitor cells that may affect disease predisposition and disease resistance.” To put it even more clearly, Everson is saying that if the processes triggered by sleep deprivation in rats are found in humans, our bones may not be able to handle the repeated activities of everyday life, and we might become prone to new or different diseases.

Dr. Steven R. Goodman, editor-in-chief of Experimental Biology and Medicine, the medical journal where the study resides this month, notes that the rigors and luxury of modern life come with a lot of stress and distraction, things that keep us from sleeping as much as we should. It’s somewhat common knowledge that the older we get, the more difficult it is for our bones to heal and repair themselves. Goodman notes that if the results Everson found with the rats carry over to human lack of sleep, then that could lead us to being able to do something about our bones becoming weaker as we age.

So, tonight when you don’t stop Netflix from auto-playing three more episodes than you originally intended to watch, keep in mind you might be damaging your bones.