MeCam Is A Personal Quadcopter Camera | The Mary Sue

Meet MeCam, The $50 Surveillance Drone That Will Watch You Wherever You Go Next Year 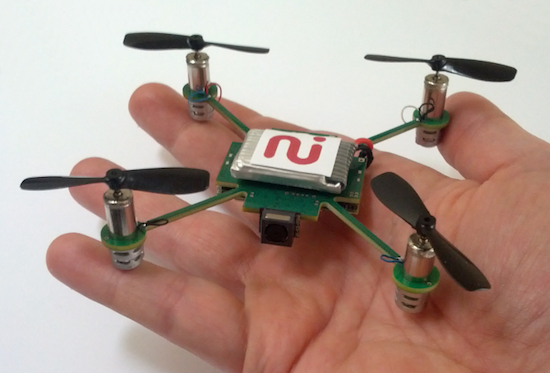 Have you always wanted a tiny robot that hovers behind you, documenting your every move, but don’t want to spend thousands of dollars on a lumbering UAV or a quadcopter so noisy it can’t join you inside fancy restaurants? Of course you have, because it’s pretty clearly the coolest part of living in a self-inflicted Orwellian police state. Well, your long wait is getting close to over with the announcement of MeCam, a tiny, digital camera-equipped quadcopter that will follow you around and upload pictures and videos of you to Facebook, YouTube, Twitter, and more in real time. Even better? The MeCam is small enough to fit in the palm of your hand, and should retail for just $50 when it comes to market early next year, meaning you’ll never again have to worry about living an unexamined life.

With a planned launch date of early 2014, the MeCam is one ambitious little piece of equipment from tech company Always Innovating, which plans to license the tech to other companies rather than produce the copters itself. Equipped with a small digital camera, the copter won’t need a remote control, but will instead respond to voice commands. It can also be set in a simple ‘follow mode,’ to keep pace with — and tabs on — its owner. Like a puppy, if puppies hovered over your shoulder making an eerie buzzing noise and recording everything you do.

It’s makers brag that the little copter carries 14 sensors to help keep it stable and maintain smooth shooting so your life doesn’t always look like a scene from some bad found footage horror movie, and boasts a sound filter that keeps audio clear as well. If all of that sounds like a lot to ask for an MSRP of $49… well, it is, but I guess we’ll all find out together if those promises are too good to be true.

Here’s the thing that worries us about MeCam — once this hits the market, we’re going to be about thirty seconds from someone hacking it to follow other people, or do surveillance of certain areas, or any number of things that are less wholesome than simply having a personal surveillance drone follow you around and upload your daily activities to the Internet for public consumption, which, let’s face it, isn’t all that wholesome to begin with.

That said, the technology to do those things is already out there, and it’s not necessarily a bad thing — in fact, it’s already helping fathers keep track of their sons on the way to the bus stop, which worries us less than the pretty much inevitable tracking your ex-girlfriend work to which it will no doubt be put. While MeCam will make those sorts of shenanigans cheaper and easier to get up to, you can’t really fault it for that, as it is… kind of the whole point of technological progress. Don’t hate the game of cheap drones, in other words — be creeped out by the legions of skeeves who will no doubt be putting MeCams and homebrewed devices like it to use in unseemly fashion.

That said, if we could get one of these that also had access to the Internet and headlines from the future, maybe it wouldn’t be all bad? Oh, also, it should talk to us in the voice of Billy West.