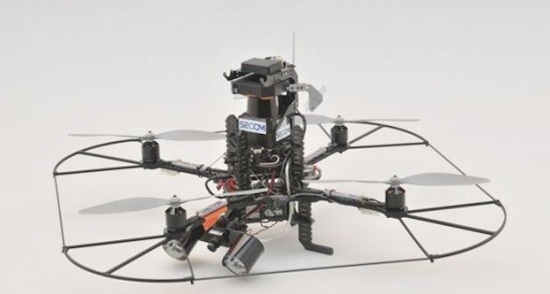 If you’re one of those folks who is always on the lookout for the latest and greatest new advance in home security technology, we’ve got you covered — or at least, we know who does. Japanese security firm Secom is preparing to launch a new service that will let home and small business owners rent a quadcopter drone that the company claims will launch automatically in the event of a burglary, snapping pictures of the invaders and even capturing live video of them as the crime is in progress.

The drones would be just a part of a more traditional line of home security. When a breach is indicated by motion detectors or other more old school security methods, the quadcopter would activate and be dispatched to the scene of the break-in to get a firsthand, eye-in-the-sky look at things.

Secom hopes to launch the rent-a-drone business in Japanese markets beginning in early 2014. While rates of home burglary and violent crime are low in Japan, the company is also touting the drones as a cost-effective way to monitor large areas — like warehouses and industrial parks — without mounting legions of video cameras on every rooftop. At the currently estimated price of 5,000 yen per drone per month, that does actually sound pretty reasonable.

If the service is successful, Secom hopes to expand it to other nations in short order, bringing us one step closer to a police state where the skies are constantly patrolled by surveillance robots before 2020 rolls around. Between this sort of thing and the GPS monitors we all carry in our pockets these days, we can be sure that somewhere, George Orwell is spinning in his grave so fast that the energy he’s producing could power a small island nation.