So they've discovered the super burrito, then? 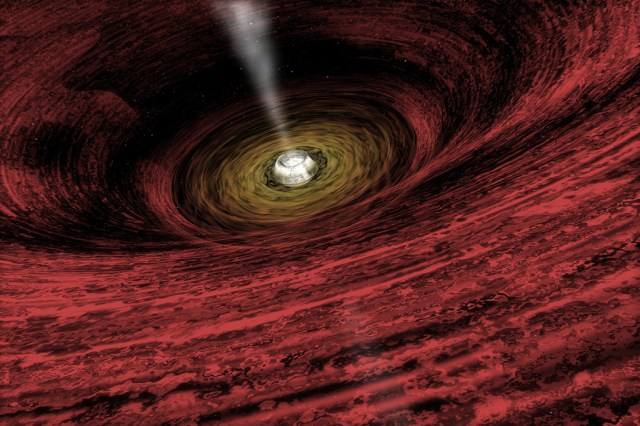 Supermassive black holes are the enormous, hungry gravitational centers of our galaxies, but eating all of that matter leaves them a little gassy. So gassy, in fact, that they eject streams of molecular hydrogen (two hydrogen molecules bound together) at speeds of 1 million kilometers per hour. Much like farting is a normal part of your body’s healthy function, so the gas passed by black holes is important to galaxy evolution, and now scientists know how they work.

The gas the black holes expel is the cold gas that is necessary for star formation, so as the gas is pushed out of a galaxy, it directly impacts that galaxy’s ability to form new stars and evolve. Scientists have known that for some time, but it hasn’t been quite clear exactly how the gas reaches the speeds that propel it out into interstellar space.

Researchers at the University of Sheffield used the Very Large Telescope of the European Southern Observatory in Chile to make the observation that the gas speed is affected by powerful jets of relativistic particles (like electrons) emitted by black holes. They saw that the fast-moving particles do indeed heat and speed up the hydrogen gas to a million kilometers per hour, according to the results published in Nature.

Scientists had theorized that electrons had been increasing the potency of black holes’ wind, but they were still surprised to see that, in practice, the gas could remain intact at such high velocity. They have apparently never heard the schoolyard legend of the kid who farts clear through his desk chair. Someday, we will unlock his secrets. Black holes have the answers.