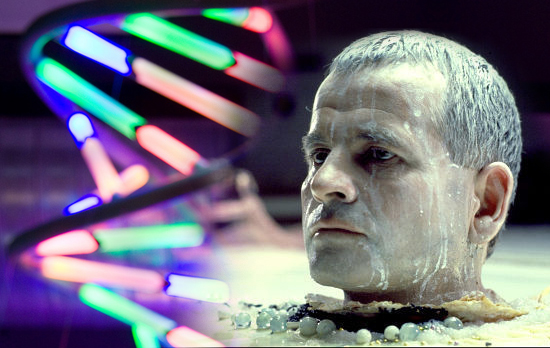 Do you know what the Singularity is? It’s that apocryphal-unless-it-happens sci-fi-like event, championed by Ray Kurzweil, in which humans and machines merge and we as a species are forever transformed. None can say whether the the artificial mind and the real mind will become as one, but we’re making advances in that direction every day. Now bioengineers at Stanford University have made transistors from genetic materials in lieu of the semiconducting materials normally used. A nice big step toward Singularity. Biological computers!

It starts with the transistor, the primary building block of the digital world and the reason we have cars, phones, and video games.

Published in Science, this new development is the work of postdoctoral scholar of bioengineering Jerome Bonnet and his team. They’re calling their bio-transistors “transcriptors,” and they’re made from DNA and RNA. “Transcriptors are the key component behind amplifying genetic logic,” says Bonnet.

This means engineers can compute inside living cells, giving them the ability to monitor what goes on around them or even toggle on and off cell reproduction. Transcriptors determine the flow of a specific protein or RNA polymerase (RNA-producing enzymes) in a strand of DNA, like electrons through a wire.

In electrical engineering, there is something called a logic-gate, another of the building blocks of a computer, which uses Boolean logic — a system of 1s and 0s which represent on or off, open, or closed. Bonnet’s paper says their transcriptors have their own biological version, which they’re calling “Boolean Integrase Logic” (“BIL gates” for short), and these are the third and final component of a complete biological computer.

So what’s the use of logic? Bonnet said the possibilities for logic are as endless in a biological setting as in electronics:

“You could test whether a given cell had been exposed to any number of external stimuli — the presence of glucose and caffeine, for instance. BIL gates would allow you to make that determination and to store that information so you could easily identify those which had been exposed and which had not.”

The team used very specific enzyme combinations to control the flow of enzymes through DNA. “The choice of enzymes is important,” he went on to say. “We have been careful to select enzymes that function in bacteria, fungi, plants and animals, so that bio-computers can be engineered within a variety of organisms.”

As a fan of fungi, that’s intriguing to me! Computer toadstools are hopefully the future. Maybe.

But seriously, the application of this technology is wide open and Bonnet is happy to share his team’s work with the public:

“Most biotechnology has not yet been imagined. Let alone made true. By freely sharing important basic tools everyone can work better together.”

All right, so there won’t be any synthetic people walking around anytime soon, but it may not be too long before bio-computers can keep an eye on our insides and make sure we’re doing all right. How thoughtful!

(Stanford University via Science Daily, images courtesy of imgfave.com, and ®DS on Flickr)