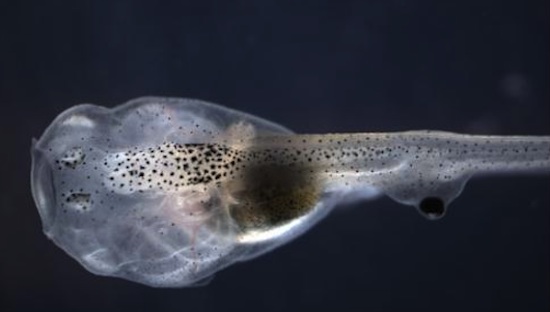 Yes, you read that right. Researchers at Tufts University have found that an ectopic eye transplanted near the tail of a tadpole — an eye that has no direct connection to the animal’s brain — will still let the animal see. It’s the first time that researchers have observed a vertebrate that can demonstrate vision through a non-traditional, implanted eye, and the implications for bioengineering could be impressive. The results suggest that we could one day develop literal working eyes in the back of our head — or in our palms, like the Pale Man in Pan’s Labyrinth. You know, if you’re into that sort of thing.

The ability of tadpoles to grow ectopic eyes is long established in scientific literature, but it’s never been understood whether the animals are capable of seeing out of them. In the study, published online this week in The Journal of Experimental Biology, researchers Doug Blackiston and Michael Levin harvested the cellular beginnings of eyes from frog embryos, and grafted those cells to the animals’ posteriors, resulting in tadpoles with no eyes on their face, but functioning eyes on their butts. The eyes grew nerve connections into the surrounding tissue, reaching the spine in a few rare cases, but they never had the direct connection to the brain enjoyed by standard eyes.

To tests whether these eyes really were functional, researchers shone blue and red lights into the tadpole’s dishes. Blue lit areas were safe space, but swimming into a red lit area earned the creatures an electric shock. If tadpoles learned to avoid red lit areas 70% of the time — a result shown only in tadpoles whose transplanted eye nerves connected to their spines — it was takes as a sign that the ectopic eye was functioning in some way and the creature wasn’t fully blind. Somehow, it was seeing through the transplanted eye, even though the sensory information it was picking up was transmitted through the spine, not the optic nerve.

What’s not clear yet is how much the regenerative powers of the tadpole affect this ability, and whether the principles can be extrapolated to more complicated creatures like humans at some. Then again, the new evidence could have implications not just in biology, but in robotics as well. Researchers outside of the Tufts team are hopeful that they can take lessons from the tadpole’s plasticity and flexibility to help robots integrate devices like cameras quickly and easily, even if such additions were not part of their original design.

(via The Scientist, image courtesy of Douglas Blackiston and Mark Levin)