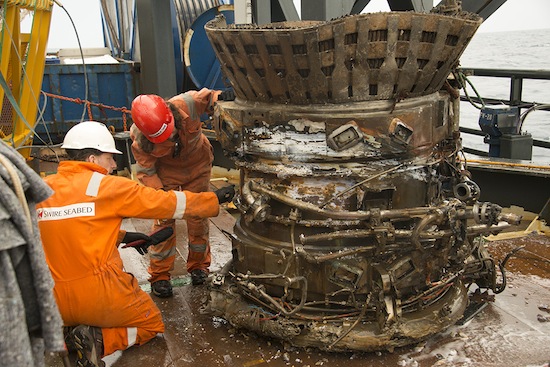 Say what you will about Amazon founder Jeff Bezos, but the dude does being a billionaire right. When life presented Bezos with the burning question, :What do you do when you have more money than God?” Bezos responded, “I guess throw some of it behind helping to make robots who can pull old rocket engines up from the bottom of the sea.” This is a demonstrably correct answer to the question, and today, Bezos announced that the F-1 Recovery Project that he’s spearheaded has borne fruit, resulting in the successful reclamation of several F-1 engines that drove NASA’s Apollo missions.

Now, Bezos’ mission to recover the engines could have taken a sleazy turn if he was out collecting neat trophies for a personal collection. I’ve said here before that space artifacts are an important part of our cultural heritage and should belong to everyone and I stick to my guns on that. It seems that Bezos and I are of a mind on that point, though, as the F-1 Recovery Project’s goal has always been to bring back the rockets so they can be returned to NASA for posterity.

There are no announced plans for what the space agency will do with them yet beyond restoration and display, but chances are pretty good that they’ll end up in a museum at some point, which beats the hell out of them sitting on the ocean floor. Speaking of them sitting on the ocean floor, you can see the engines do just that while robots swarm around them in this video.

What an incredible adventure. We are right now onboard the Seabed Worker headed back to Cape Canaveral after finishing three weeks at sea, working almost 3 miles below the surface. We found so much. We’ve seen an underwater wonderland – an incredible sculpture garden of twisted F-1 engines that tells the story of a fiery and violent end, one that serves testament to the Apollo program. We photographed many beautiful objects in situ and have now recovered many prime pieces. Each piece we bring on deck conjures for me the thousands of engineers who worked together back then to do what for all time had been thought surely impossible.

Seriously, other bazillionaires, take note. This is a very good sort of way to spend your money giving back to people and cultural institutions. Granted, becoming a masked superhero and fighting crime is also very good, but much harder and more dangerous, so maybe just take a cue from this sort of thing.