Some Rich Jerk Could Own a Chunk of the Moon, but the Classy Thing to Do Is Let a Museum Buy It 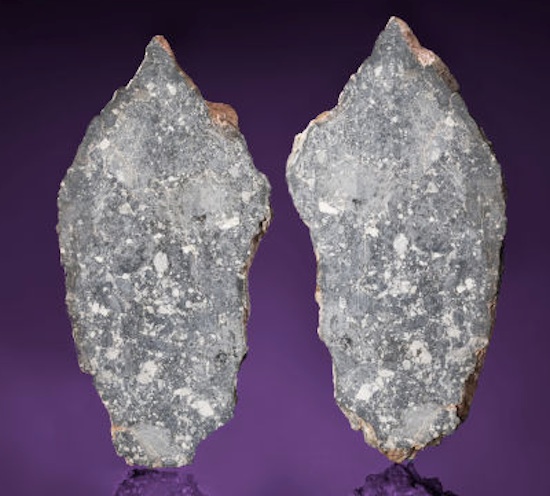 An honest-to-goodness piece of the real life Moon hits the auction block at Heritage Auctions this week, and it’s one of the first in some time to be opened to a private auction. Bidding on the moon meteorite, Dar Al Gani 1058, which fell to Earth and was discovered in Libya, starts at $170,000, but the final price is expected to be as high as $380,000. The rock, a nearly four pound chunk of breccia from the far side of the moon split in two pieces, would make a great addition to any number of natural history museums across the planet, where it would find a home on display for people to come and marvel at it everyday, perhaps never knowing when or if they would ever see a thing like it again. Or, somebody with too much money on their hands and a dearth of class and decency could buy it and put it in mothballs.

Consider this an open letter to anyone with that much money who is thinking of purchasing the rock for a private collection: Don’t do that, because it would make you a huge jerk.

Now, before everyone piles on to call me a freedom hating Communist who just doesn’t understand free markets — I get it. I understand that we live in a free society and people with money are welcome to do as they please with it as long as they don’t break the law. I fully understand that, and we are 100% on the same page. However, having enough money to do whatever you want and the things you do being classy, tasteful, or respectable are two entirely different things. No one is claiming that some rich person out there doesn’t have the right to buy this moon rock. That said, most half-smart first graders understand that just because you can do something doesn’t mean you should. If you have a lot of money and use it to live well, fine. If you have a lot of money and use it to hunt large and reasonably intelligent animals for sport, you’re a jerk. If you have a lot of money and decide you want to buy a helicopter for yourself, that’s none of anybody’s business. If you use that money to squirrel away an important scientific artifact? Once again, you’re a jerk. So please don’t be a jerk.

Putting this in a private collection isn’t even respectable villainy. It’s cartoonish, Disney grade villainy. Owning a moon rock won’t make anyone fear you, or think you’re cool or powerful. It will just make them think that you are a buffoon with way more money than class, and they will be right. Because storing this in a private collection isn’t the action of a grown, thinking person. It’s the sort of thing a child would do — a small, petulant child who hasn’t yet learned that sharing a thing is better than not sharing it. It’s also the sort of thing that gives people who happen to be wealthy a bad rap, because some of them act like loud jerks who get to make their own rules and behave as if having the ability to do something makes it the right thing to do.

So let’s qualify my earlier statement: Anyone who wants to and has the cash to burn can buy this moon rock, but doing so to put it in a personal collection — to hide it away from prying eyes who might want to share in the wonder of a piece of the cosmos, as if someone else’s enjoyment of a thing would somehow cheapen your own — would make you a terrible, terrible person. Just a useless, worthless jerk. The sort of abominable joke of a human being that the rest of us would feel sad for if you weren’t so repugnant and vile as to transform any sympathy or pity that approached you into just another layer of wretchedness.