The Official Definitive Authority on the Extreme, Guinness World Records, has found the world’s oldest yoga teacher — or at least, as both Jezebel and the Associated Press point out, the world’s oldest yoga teacher who was available to fill out the proper documentation: 91-year-old Bernice Bates! This ultra-healthy great-grandmother teaches yoga at her retirement home in Florida and can do that pose above (boat pose), which is a lot harder than it looks. Seriously, let’s celebrate Bernice Bates today. She can do that, plus she’s helping her peers live a more comfortable, flexible life. Namaste!

Nominated for the honor by her daughter, Bates has been practicing yoga for over 50 years, and once she discovered the true benefits, she never looked back. But even before that, she was still involved in athletics and fitness as a swimming teacher in Ohio.

Now, in her weekly classes at the retirement home, she teaches seniors in their 70s, 80s, and 90s how to better care for their aging bodies and avoid a lot of health problems that befall people their age. In fact, yoga is one of the best exercises for senior citizens because it doesn’t have to be “strenuous, competitive, or sweaty.” Plus, as Bates points out:

“You may not do it perfect, but there’s no perfect person.”

Her students have reported feeling great benefits including better balance, flexibility, and loosening of muscles. In the long run, and with continued practice, this kind of exercise provides better protection from falls, which can lead to being bedridden, which can lead to several other health problems that might become insurmountable. 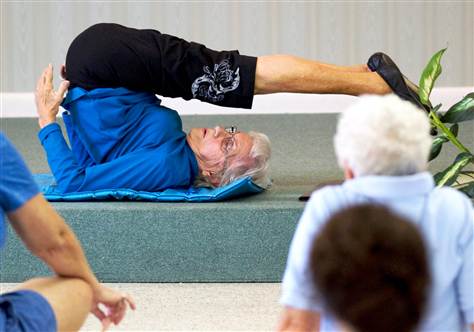 In addition to teaching yoga, Bates practices daily by stretching as soon as she wakes up, along with walking, swimming, and lifting weights. She says she takes no medications and is free of any health problems. In other words, she is the picture of health, and should set an example for people of all ages. And she recommends yoga very highly:

“It gives you a good outlook. It involves your mind … Your mind, your body and your spirit. They all work together and they’re all coordinated. Whereas when you’re on a treadmill, that’s all you’re doing, and you’re tired when you’re done. We build energy in our body, we don’t take it out.”

True, it is entirely possible that in some remote parts of the Earth, in places that Guinness hasn’t tapped (haha, little beer joke), there might be even older yogis who have not been discovered and are in equally admirable health with an equally positive outlook. But until they are found, we are thankful to have discovered Bernice Bates.