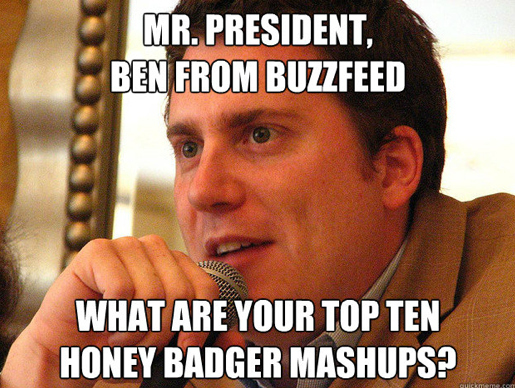 BuzzFeed, the web aggregation juggernaut, has announced that popular political writer Ben Smith will be taking over as Editor-in-Chief of the site as of January 1st. With the new face, there will be a new emphasis on breaking news and original reporting. In celebration of the announcement, BuzzFeed let loose a new meme they’ve christened “Ben From BuzzFeed.”

BuzzFeed, which launched in 2006, has relied on a mixture of fast-paced posting on the popular Internet trends of the moment, which it finds with a mixture of secret robots and editorial staff. The site has seen an enormous surge of interest in the past year or so, as the popularity of emergent online trends and memes has captured the public’s attention. For their part, the site has helped to propel some trends — like planking — and created others — like Horsemaning.

This might seem like an odd fit for Smith, who has worked primarily for the daily news site Politico up to this point. However, the addition of Smith is part of a larger shift within BuzzFeed itself. Along with an established reporter in the EIC’s chair, BuzzFeed will also bring on a slew of dedicated reporters. Of course, the addition of breaking original reporting to BuzzFeed is well in character of the site’s co-founder Jonah Peretti, who also co-founded The Huffington Post. From the New York Times:

As editor in chief, Mr. Smith will hire more than a dozen reporters right away, said Jonah Peretti, who founded BuzzFeed with Kenneth Lerer, “and then we will keep growing from there.” The reporters will be scoop generators, Mr. Peretti said. “By breaking scoops and drawing attention,” he added, they will help increase traffic and, by extension, advertising sales.

Looking at the bigger picture, the addition of a dedicated news staff is a bit of a coup for the website. While some have bemoaned the death of print, established publications like the New York Times and others have maintained a vital role in the Internet news ecosystem by becoming the source for most stories. A news staff, on top of BuzzFeed’s powerful aggregation and large built-in audience, could establish a new paradigm for online content production.

Though he will be working at Buzzfeed, Smith will apparently continue providing political coverage for Politico. For their part, the BuzzFeed staff acknowleded the surprising nature of today’s announcement by creating a series of tongue-in-cheek Memes featuring their new EIC in a fictional interview with the President. A sure sign that although changes are coming, BuzzFeed will continue its breathtakingly paced coverage of Internet tomfoolery.

(via NYT, BuzzFeed, image via BuzzFeed)