Encyclopedia Dramatica Is No More: OhInternet Rises from the Ashes 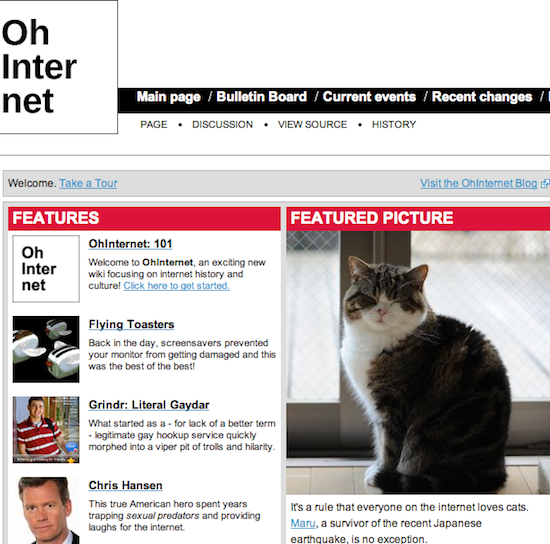 From 2004 to 2011, Encyclopedia Dramatica was one of the few resources out there for people who wanted to learn about the strange culture of the Internet. The open wiki was always anarchic, and frequently racist, homophobic and otherwise offensive — indeed, last year, the Australian Human Rights Commission threatened it with legal action over an article that “encourage[d] racial hatred against Aborigines.” In more recent years, Know Your Meme, which was recently purchased by Cheezburger Networks at a low seven-figure valuation, picked up the slack in educating readers about Internet arcana, as did meme-savvier blogs. But Dramatica, for better or worse, remained the one outlet that covered many topics that more mainstream outlets feared to touch, and frequently exposed the dark underbelly of Internet happenings on which other sites tried to paint a cheerier facade.

Last night, visitors to Dramatica’s home page found themselves automatically redirected to a new site called OhInternet which appeared to have more in common with the new, slicker generation of Internet culture trackers than with the unvarnished, offensive Dramatica of old. Some fans of Dramatica wondered if this was an elaborate troll or an April Fool’s joke; visiting Dramatica’s old IP address, 208.99.87.133, gave a message that was interpreted by some to mean that Dramatica was only temporarily offline. But the redirect is permanent, Encyclopedia Dramatica founder and current OhInternet primary contributor Sherrod DeGrippo told me by email, and OhInternet is here to stay.

Encyclopedia Dramatica is no more.

DeGrippo says that the biggest difference between OhInternet and Dramatica is that the new site has moved towards “a more toned down content style and a streamlined design: Shock for shock’s sake is old at this point and we’re looking forward to the future and how things are evolving … when you put user experience first, the language becomes highly important and that’s what we’ve done.” To that end, the site is built using Semantic MediaWiki, which should allow for better query results, especially for people and dates, and a more rigorous ability to document change over time. While we’re on the subject of time, it’s worth noting that not all Dramatica content will be absent from the site: Some articles, like the OhInternet article on Reddit, link to an archived copy of Dramatica’s old article.

In his blog post announcing the sale of Know Your Meme, the site’s former owner, Andrew Baron, took a shot at Dramatica, writing that “The other platform of note, Encyclopedia Dramatica is not a site that is comfortable to be on for most people, unless you are okay with racism and pornography in all of your content, but surprisingly, a lot of people are.” While OhInternet inevitably draws comparisons to Know Your Meme, DeGrippo points out key differences: “I don’t have a lot of visibility into ICHC/KYM, though I do know they have $30million dollars and don’t allow direct editing of their content. When you have that much VC, you aren’t beholden to the community anymore, you’re beholden to VC dudes and shareholders and everything else that comes along with bankers giving you multimillions. The opposite of agile. OhInternet isn’t beholden to anyone but me and my users. They have gatekeepers who decide what is and is not worthy of coverage,” she said via email.

“OhInternet considers the entire internet worthy of documenting, which includes mobile apps, startup execs, programmers, subcultures, events and yes, memes too. The users make the decisions on that, not shareholders or a board of directors. OhInternet is something I take very personally. We don’t have paid staff or writers or any employees, we DIY everything and I’m in there every single day, creating content myself and am available on our IRC network.”

Having presided over the chaos of Encyclopedia Dramatica since 2004, DeGrippo is uniquely qualified to head up this effort: She’s been there, in Internet terms, and the site’s blog, for which she serves as a primary contributor, boasts some weightier content than you might expect, including a lengthy exclusive interview series with notorious hacker Weev.

The site does have its work cut out for it in winning over Dramatica fans, though. Last night, as regular Encyclopedia Dramatica visitors were discovering the redirect, Oh Internet’s Facebook wall was bombarded with hate messages, graphic pornography, and the like, though the page has been scrubbed as of this morning. And as much as there may have been to loathe about Dramatica, an Internet without it is by definition a more homogeneous one. One Redditor writes in a thread largely critical of the shift that “I think that what we’re seeing is the final development of Web2.0. They’re turning ED into KnowYourMeme – an encyclopedia of internet culture told from the outside, complete with bright styling, vanilla writing and ads everywhere. I-I-I…yeah.”

Still, OhInternet comes into the game off of a huge launchpad: DeGrippo says the site has already amassed 4000 newsletter signups and “generated a lot of interest on various social networks.” Its Facebook page, for all the raiding, already managed to pick up 650 fans. As any celebrity publicist or successful troll will tell you, controversy sells, and while OhInternet is likely to be the target of Dramatica loyalists’ wrath, raids, and mischief for some time now, that just could give it the traffic and the impetus to take off.