How Do 4chan Users Feel About canv.as? 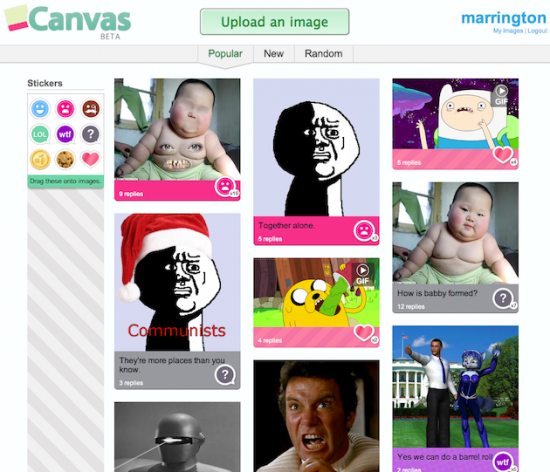 This afternoon, Christopher Poole, a.k.a. moot, announced the closed beta launch of Canvas (canv.as), which aspires to be “the best place to share and play with images.” The site looks pretty enough [though I say this based on screenshots, having not received one of the 4,000 launch invites], but what makes this launch notable is moot’s role as the founder and administrator of 4chan.org [warning: 4chan], the feared and revered imageboard and hub of breathtaking creativity and unspeakable villainy.

Thanks to its founder and its image-centric nature, comparisons to 4chan are inevitable for Canvas, which raised $625,000 in funding. TechCrunch guesses that “more than a few of the 4chan crowd may head over to Canvas to take a gander.” Maybe so, but Canvas, which some in the tech press have referred to as “4chan 2,” has its work cut out for it if it wants to win over the sizable population of 4chan 1.0.

Saying that 4chan users all believe X is just about as silly as saying that Facebook users all believe X — while there’s a prevailing attitude and culture on the site, it is after all a collection of a large number of different people. But the initial reaction has been pretty uniformly negative. Following the announcement of the site’s beta launch, 4chan users [in respect of the site’s prevailing rules, we did not look at a board named after the second letter of the alphabet] have expressed skepticism about the concept and accused moot of selling out. “I wonder how the volunteer mods feel about the fact that they ran moots site and now he’s getting rich off of it,” wrote one reader. “It’s the most horrible thing a human being like m00t could come up with,” wrote another.

One highly critical and apparently 4chan-familiar TechCrunch reader summarized his feelings as such:

I find it disturbing…. that a site well known for trolling and increasing the embarrassment of individuals online via doxing & meming, want you to use Facebook to request an invite “granting access to your real life data to 4chan” is ridiculously stupid.

Just another start up that want’s to suck blood & data out of Facebook.

Sorry guys teh pools closed to real lifers only 4now.

[While it’s unclear that the site in its final form will require connection with Facebook, one must currently log in to Facebook to request a beta invite.]

None of this is to say that Canvas is doomed to failure; it’s often difficult to expand without angering early fans, and as the recent $30 million investment into Cheezburger Network illustrates, there’s potentially big money to be made in popularizing Internet culture. But in attempting to paint a more respectable, marketable face on 4channian image-sharing, Canvas will need to work hard to keep the colors from bleeding.