But seriously, where is the mustache? 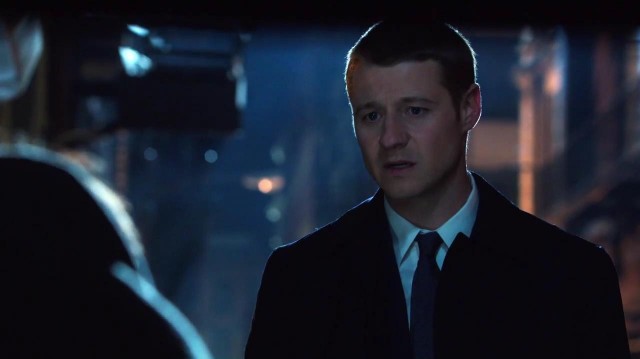 TV’s most promising fall show Gotham premiered last night on FOX! We here at The Mary Sue had the opportunity to chat with Ben McKenzie, Gotham’s young Jim Gordon, and ask him some questions about how he feels about the show—and the iconic fictional city of the same name.

We mentioned to McKenzie that Gotham has a lot of excellent female characters in positions of power and asked him if he could talk a bit about his relationships with his boss, Captain Sarah Essen (Zabryna Guevara), and big bad Fish Mooney (Jada Pinkett Smith).

“Absolutely. You’re right, there are a lot of powerful characters in Gotham,” McKenzie agreed, “and I think what’s kind of great about Gotham is that we can portray a society that is similar to ours, perhaps, but in which there is no even understanding of racism or sexism; it’s all just whoever is battling for power in a city that’s completely fallen.”

As for Fish, McKenzie said that she’s “really good” at battling for power. “She’s an enforcer for Carmine, and she’s really tough, she’s really smart, she uses her sex appeal to get what she wants, and Jada just kills it. She’s just really, really strong and powerful and interesting and funny, at times.”

As for Sarah Essen, captain of the GCPD—who, in the comics, does at one point become Sarah Essen Gordon—McKenzie loves her toughness. “She has to answer to a number of different bosses, not just her superiors in the department, but effectively, in some senses, the mob themselves,” he said, “because they have such deep ties to the police department and to the mayor’s office, that sometimes her hands are tied.”

“That being said, she wants to catch whatever criminal we’re chasing in that particular week, and she wants to support her detectives, and so over time, Gordon sort of earns her respect and her trust and her support, and eventually, you’ll see down the line, she’ll put herself out on a limb for him.”

McKenzie also answered the one question fans have all been wondering about – where is Jim Gordon’s iconic ‘stache?!

“I had lengthy conversations with [showrunner] Bruno [Heller] and [director] Danny [Cannon] about everything else,” said McKenzie. “Lengthy, lengthy conversations about all sorts of things, meeting after meeting. And then as soon as it hit the internet that I was doing [Gotham], it felt like all anyone wanted to talk about was whether I would have a mustache or not! I thought about ringing Bruno and being like, ‘Uh, one last thing I forgot to—’ We just literally never talked about it. And then I brought it up to him and he goes, ‘No, that would look ridiculous on you. We’re not doing that.'”

“You know, it’s 20 years before he can grow into the maturity and wisdom that it takes to sport a mustache, and that’s the line we’re sticking to,” McKenzie laughed. “Maybe 20 years from now the mustache will feel, you know, earned. I can grow it,” he added. “For the record, I can grow the mustache. If you think that I can’t, you should watch Junebug. So it’s not—I’m not afraid of the mustache, I just don’t feel it’s appropriate for the image.”

McKenzie admitted to feeling both excited and daunted at the idea of joining a show that has 75 years of mythology behind it, but that—as a Batman fan—he just wanted to be sure that he wouldn’t “screw it up” or “embarrass” himself, which is pretty sweet. They’re trying to keep a “sense of realism” in the show but also give it some “fantastical” and “approachable” elements that will perhaps make it feel a bit more true to its comic origins than something like McKenzie’s previous cop show, Southland.

“We want to feel free to take a certain amount of liberty with tactical stuff and just kind of give it more of a, sort of, throwback to kind of an old school gumshoe show,” said McKenzie, “a noir kind of conceit, with a little bit of cop tactics in it, if that makes any sense.”

McKenzie also thinks that comics have become intrinsic to entertainment because, at this point, “comics have kind of become American folklore. They’re sort of what we have as a newer country to pass down from generation to generation, and to evolve from generation to generation, to fit the society in which we live,” he said. “And Batman is a really interesting example of that, in the sense that he is a vigilante fighting for justice in an unjust world, and I think there’s an awful lot of cynicism around us. So we can all relate to the idea of having this caped crusader out there fighting for us, and fighting for justice.”

Well said, Ben McKenzie. I would have to agree.

If you watched the Gotham premiere last night and want to share your thoughts on it, head over to our Gotham Episode One Discussion Post. Personally, I’m most excited about