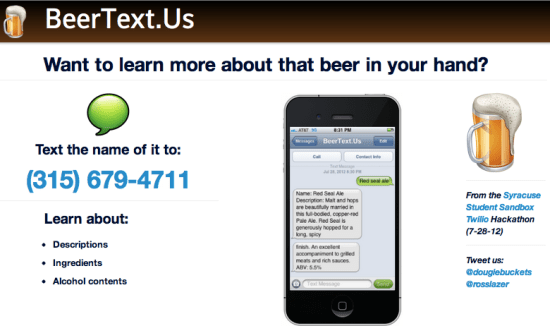 If you’re out at a bar or alone in your apartment wallowing in your own loneliness, and want to know some facts about the beer you’re either popularly socially drinking or using to drown your sorrows, there’s now a service for that. No, not Wikipedia. If you send BeerText.Us a text message with the name of your beer, it’ll send one back with information that should satiate your never-ending thirst for beer knowledge.

Granted, you could be too drunk to accurately type a text message or yell at Siri, or you could be drinking mystery beer without a name to text, but if you can send a text message with the correct name of the beer, you’ll receive a response text providing descriptions of the beer, ingredients that make it up, and importantly, the alcohol content. The service is fairly simple, just send a text with the name of the beer to (315) 679-4711, and await your response.

However, the service isn’t perfect yet. Users report that the service responds with a character-load of facts for certain beers, which could easily split into and become way too many individual text messages. So, users with a text limit may want to learn about beer through text messages with caution. As anyone who has received long, separated text messages knows, this also means that your beer facts may not only be split into many messages, but arrive out of order. One user reports that Jack D’or returned 40 text messages, so be careful.

Aside from the massive amount of texts one drink inquiry can return, the service actually seems pretty handy for users that like to frequent bars without data reception, and must know about the beer they just put into their body.