Davy Crockett is alive and well and living in Bosnia. We're confused as to why he's working as a shepherd, though. 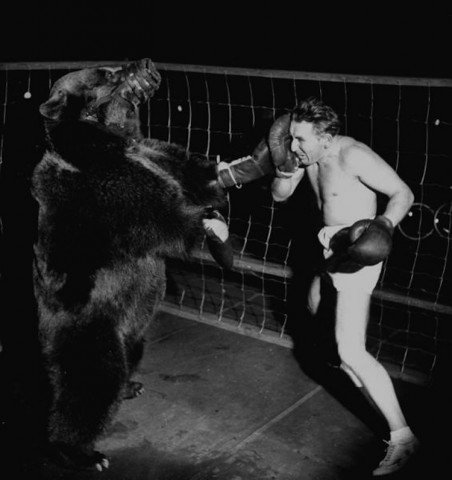 A Bosnian shepherd is really earning his “World’s Best Shepherd” coffee mug this week after killing a brown bear with his bare hands to protect himself and his flock. Russian media reports that 48-year-old Blazo Grkovic was leading sheep around  — is this what shepherds do? I have no idea — when he was attacked by a brown bear. Unable to draw the small hand ax he kept on his person, presumably for situations exactly like this one, Grkovic defended himself the only way he knew how, by grabbing the bear’s throat and strangling it to death.

It is, of course, a shame that the bear had to die, as they are pretty great animals for whom I have an admitted soft spot. Reports indicate that the bear took the first swing, though, and you can hardly blame Grkovic for going for the throat in this scenario. Frankly, the bear apparently should have listened to his more conservative colleagues, who no doubt warned him that some days, you get the shepherd, but some days, the shepherd gets you.

Following his fight with a bear, Grkovic reportedly traveled more than a mile over rough, mountainous terrain before he was able to contact an ambulance and be treated for a number of bruises, bumps, and lacerations, presumably because his story was not yet badass enough. The world’s new number one contender for the Bear Boxing title belt will spend the next week in a hospital bed, which is a pretty reasonable place to spend the week after you’ve been attacked by a bear.

Unfortunately, we don’t have footage of this epic fight. What we do have, though, is a historical recreation of sorts. And while this boxing match does lack the adrenalin-fueled desperation of a man battling to save his sheep, it does have a bear wearing boxing gloves, which is something we approve of wholeheartedly.