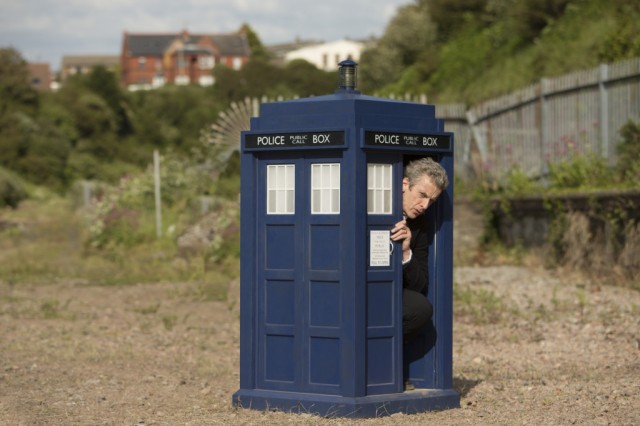 Can it be this TARDIS? Please?

Doctor Who TV reports on Peter Capaldi discussing the budgetary issues at the BBC and how they factor in to his day job.

Speaking at An Afternoon with Mark Gatiss and Friends about the prop reuse including the Sonic Screwdriver: “I have to say, the BBC are very responsible with license payer’s money. So they feel if they’ve spent a certain amount of money on a certain amount of props, then they won’t get rid of those props until they’ve been used. This applies equally to the TARDIS. It’s essentially Matt [Smith’s].”

He continued, “It’s got a sort of Edwardian look about it – not the actual console – it’s the bits and pieces lying around. Cricket bats, maps and odds and ends and things. There’s a Jules Verne quality to it – I would like to make it more Bauhaus.”

You may recall showrunner Steven Moffat defending a ratings dip of the sci-fi series just the other day, but the BBC has just released a statement confirming his optimism of DVR and iPlayer viewing:

Series 8 saw Peter Capaldi take up the iconic role of The Doctor, with an average consolidated audience of 7.4m viewers every week in the UK.

This an increase of 39% on the overnight figures reported the day after broadcast. This includes the 9.2m average audience that watched Deep Breath, Peter Capaldi’s debut episode, which is the highest figure for a non-special episode (Christmas/50th anniversary) since the opening episode of series 5 (Matt Smith’s debut) in 2010. These figures show how Doctor Who has consistently achieved big audiences across the last three series – series 7a/7b combined had an average consolidated audience of 7.4m, series 6a/6b attracted 7.5m and series 5 was viewed by 7.3m.

There has been over 18.9m requests to watch Doctor Who series 8 on BBC iPlayer – an average of 1.6m requests for each of the 12 episodes.

But how is the show faring in the US and Canada?

In the US, consolidated figures for the first 10 episodes have seen Series 8 experience a 23% uplift in total audience in Live+7 on Series 7. The series 8 premiere was the show’s highest-rated series premiere ever on BBC America, and is the first BBC Worldwide series ever to simultaneously hold the #1 slot in the Main TV Season Charts across all major Electronic Sell-through platforms in the US within 48 hours of episode 1’s release on August 24th 2014. In Canada, on the Space channel, the first 10 episodes of Series 8 have seen a 22% uplift in consolidated audience size on Series 7.

It could be my personal opinion coloring my view, but I’ve felt this was one of the most negatively reviewed season to date. But as Moffat also said the other day, “Yeah, yeah, and you’re watching it every week.”