Bathrooms Around the World Pretty Much Under Attack by Wild Animals

When Animals Attack is making a comeback, probably to a bathroom near you. 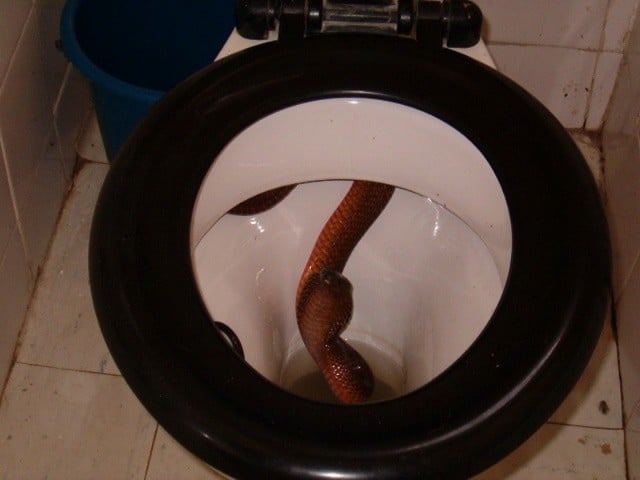 The one room in the home that most people can count on for a little privacy has in recent weeks become a nightmare place. Animal attacks, once one of many good reasons to avoid going outside, have moved into bathrooms around the world. In Israel, the latest attack saw a man minding his own business at a toilet rudely interrupted when a snake bit his penis, which might be the only situation to occur in a men’s room that is more awkward than that guy who tries to start a conversation while you’re both taking a leak.

The victim, a 35-year-old man, was using a urinal in northern Israel on Friday when he experienced a burning sensation on his penis. It wasn’t the standard-issue burning sensation, though, but the unique one involved when a snake that has taken up residence in the toilet you’re using takes exception to your presence and bites you in the junk. Considering what the guy was doing to the snake’s home, though, can you really blame it?

Luckily for the victim, the snake was rather small and wasn’t poisonous, which is probably the best kind of snakebite to get on your penis if you have to have one. The victim is recovering well, though we imagine it will be some time before he can use a restroom without cringing and zipping up too fast.

In that, he’s not alone. We imagine that 49-year-old Anthony Schofield of the U.K. will have a similarly tough time getting comfortable on the can after he was attacked by a fox while sitting on his toilet earlier this month. The wild animal, which simply strolled into Schofield’s bathroom while he was using it, also attacked his partner, Tanny Chapple, and the couple’s cat, who were not in the bathroom at the time. Oversharing to reporters, Schofield said:

“I didn’t even have time to wipe myself. I just had to chase after it. It was so quick.”

What will be the next animal attack on a person in the bathroom? A cassowary assaulting someone in the shower? A morning shave interrupted by a cantankerous octopus? We don’t know, but you can count on us to bring you the news when it breaks. Until then, try and stay safe, folks. the bathroom can be a dangerous place these days.