Technically, the car probably wasn't poop-filled before the driver locked these two poor animals inside it. 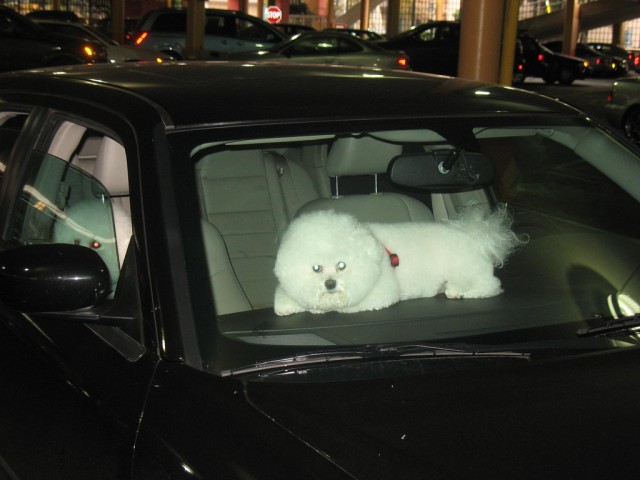 Well, this is as good a day as any for your annual PSA reminding you not to leave your beloved pets locked in the car this summer. This friendly reminder is spurred on by a gruesome 911 call in Seattle reporting a dog and a pig locked in a car in the midst of the city’s heat wave. It gets worse, though. When police responded to the call, they found both animals inside the car, the inside of which was smeared with feces. That was probably mostly the dog, though, as reports indicate that the large pot-bellied pig in the car was dressed to the nines in a pair of sweatpants.

Thankfully, the witness who had made the call had also opened the car door to offer the animals some relief from the 86-degree heat. The pets are doing fine, though those sweatpants will probably never be the same. The owner was found at a nearby bar and warned by officers not to leave animals locked in hot cars, because it demonstrates that you’re a cruel idiot. Or in this guy’s case, fine, a cruel, drunken idiot with a shit-smeared car who seems to have gotten off light, in our professional editorial opinion.

Remember, folks: The inside of your car gets a lot hotter than the temperature outside it, and on an 80-degree day, temperatures in a car can reach triple digits in no time at all. That’s an easy temperature for humans to overheat in, and most of us aren’t sporting the thick coats of our furry friends. Leaving pets in the car is unkind, dangerous, and depending on where you live, it can be against the law. So don’t do it. Don’t take our word for it, though. Check out this handy fact sheet from the ASPCA on why you shouldn’t leave pets in the car, and what to do if you accidentally do.

And if you do have to leave your pets in the car, please, at least have the decency to undress them first. Leaving them in the sweatpants is just embarrasing for everyone concerned.