Make It Count, Dude: Spider Species Dies After Having Sex

Male dark fishing spiders have just one roll in the hay in them. After mating, the arachnids immediately curl up and die. 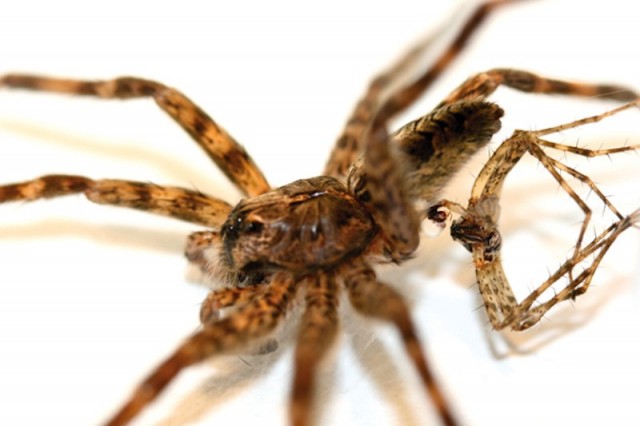 I know the human dating game can seem rough at times, but the fact of the matter is, we have it pretty good. Don’t believe me? Consider if you will the sorry state of Dolomedes tenebrosus, the dark fishing spider. A recent study of the spiders, common around the American midwest, found that males of the species get a grand total of one shot at breeding — immediately after copulation, their work on this Earth done, the creatures promptly curl up and die.

The discovery that male dark fishing spiders are essentially single-use seed packets was made after researchers from the University of Nebraska gathered specimens of the arachnids from parks around the state and used them to play the world’s most terrifying version of The Dating Game.* In each of 25 observed matings, the male spider delivered sperm into the female before almost immediately going limp and dying. The study, published this week in the journal Biology Letters, also found that the spider’s pedipalp, which it uses to deliver sperm, remained frightfully swollen following mating, unlike the pedipalps of males in other species, which shrink back down. Not that the spiders probably mind, being dead and all, but it does seem to add a little unnecessary insult to a pretty serious injury.

While there are a number of species in which females help their mates along to their final reward following a roll in the hay, female dark fishing spiders don’t seem to play any role in the deaths of their partners. Rather than being assaulted or having their head torn off and consumed like many species of mantis, the spiders seem to have simply wrapped up the worldly business, peacefully curling up and moving on to the great beyond, grotesquely engorged genitalia and all.

While dying after sex may seem strange to us, the phenomenon dovetails pretty well with what we know about evolution in sexually dimorphic species — animals in which one gender is much larger than the other. Since small animals — like the male dark fishing spider, which is outweighed by its female counterpart by about a 14 to 1 ratio — have a better chance of living long enough to mate, they’re lucky just to find one viable partner. That means monogamy is common in these animals, though the dark fishing spider does seem to be taking the principle to an extreme.

*Except for, y’know the actual The Dating Game