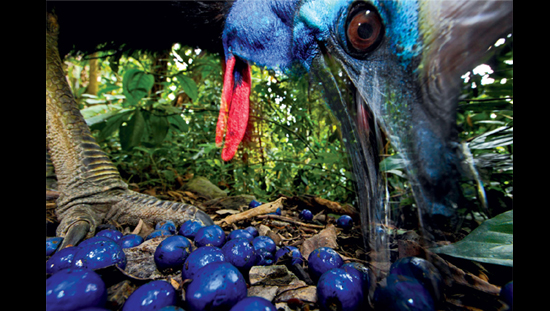 In the wilds of Australia and New Guinea, there is a dinosaur-like bird that probably wants to hurt you.  It’s probably thinking about it right now, in fact.  To be fair, it’s only because it assumes you want to tangle with it — which you totally don’t. But in the name of conservation, some are willing to. Photographer Christian Ziegler risked life and limb to photograph the Southern cassowary in Black Mountain Road, Australia. It’s even won him the top award in the 2013 World Press Photo of the Year.

Based in the Netherlands, World Press Photo is one of the world’s most prestigious annual photo contests. 2013 saw 103,481 submissions, and Ziegler — a regular photographer for National Geographic — won the first prize “single image” category for Nature, which makes being attacked repeatedly by this velociraptor-in-bird’s-clothing seem like a small price to pay.

See, the cassowary has the reputation of being the most dangerous bird in the world, not because of its prodigious, eviscerating talons, nor even its great strength as a large, flightless bird. It’s the sheer aggression and territorialism of the cassowary that makes it so deadly — not unlike the Brazilian wandering spider (which also wants to hurt you). This blue-feathered bird regularly hospitalizes people, and there have been some fatalities, too. I’m fairly sure this bad-ass bird could take down the mythological cockatrice, too.

To score his shot of the endangered, and dangerous, cassowary, Christian Ziegler explains:

“For this image, I used a remotely controlled camera which I set up under a fruiting tree that I knew he visited frequently. So when he showed up and started feeding, I was able to trigger the camera from a safe distance, without bothering him.”

Ziegler had been attacked previously and more than once, too. It was “quite scary,” he said. “I have to admit, probably the closest one can feel to being charged by a dinosaur. However, each time it was my fault for accidentally getting too close to one of the chicks.” Which you totally shouldn’t do, as evidenced by the many YouTube videos showing cassowary attacks.

But here’s the thing. The cassowary is endangered and it plays a vital role in the ecosystem of their habitats, particularly the rainforests of Queensland, Australia. They are a “keystone species,” feeding on the fruits of hundreds of different trees and then dispersing the seeds in their excrement. And not only do those seeds get a free ride, germination rates for those seeds are vastly increased when they pass through this bird’s system.

And only fruit have to worry about being eaten by the cassowary. It won’t eat you. But it’ll seriously mess you up. 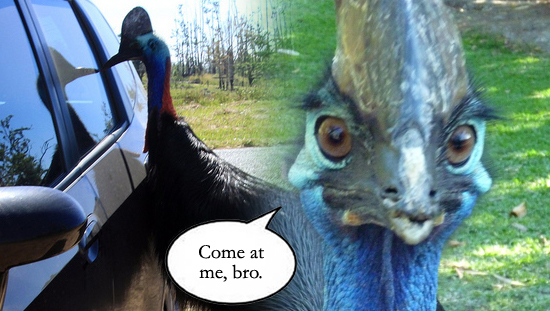