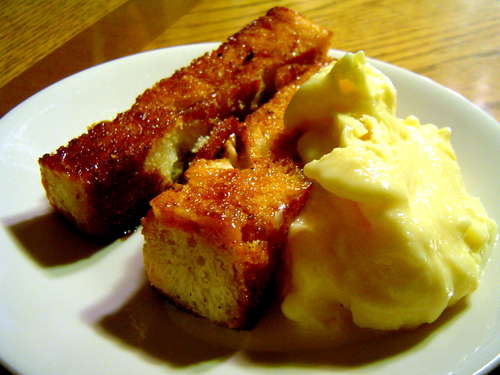 Breakfast burritos are fairly common nowadays, so maybe it isn’t such a surprise that Instructables user makendo has created a recipe that provides the world with easy, do-it-yourself bacon and egg ice cream.

Inspired by the recipe found at Heston Blumenthal’s Fat Duck Restaurant, makendo presents a simpler take, with a crowd-pleasing result. The dish contains sweet brioche toast covered in caramelized sugar with a layer of bacon marinated in whole milk, and a frozen egg mixture acting as the ice cream. Makendo vouches for the creation, stating that all 14 people who tried the odd dish liked it:

We had 14 people try the dessert, and everyone liked it, even my youngest son who doesn’t like ice cream & my wife, who doesn’t like bacon. It’s very sweet, very rich and incredibly smooth, and the bacon flavor is strong but far from overpowering.

Makendo notes that the brioche pieces are crunchy on the outside, but soft in the middle, and the overall dish both looks and smells like hot scrambled eggs and bacon on toast, but it departs from that common dish and is both sweet and frozen. The directions aren’t particularly difficult, though it will require a heavy amount of freezing and some overnight marination. If you’re the adventurous sort, you might as well give the recipe a try. The only thing you have to lose is some bacon and eggs.