Double Down: How I Learned to Stop Worrying and Love the Pulmonary Embolism 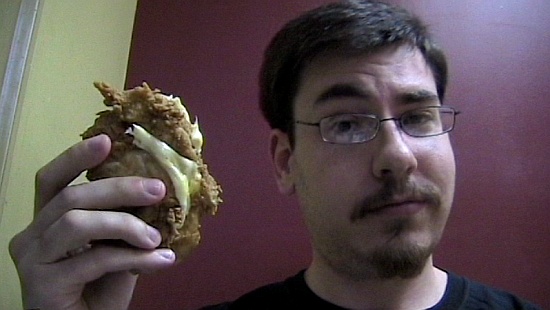 My name is Scott, and last night I ate a KFC Double Down sandwich.

The Double Down, for those of you fortunate enough to be unaware, is a “sandwich” consisting of bacon, Monterey Jack cheese, pepper jack cheese, and the Colonel’s Double Secret Probation Sauce. However, instead of using bread, they pack all that between two boneless chicken strips. All our favorite barnyard byproducts — chicken, pig, and cow — together at long last in beautiful, artery-clogging harmony.

They call it a sandwich, but that is a misnomer. Sandwiches use bread as a substrate. In fact, the first sentence of Wikipedia’s Sandwich states, “A sandwich is a food item consisting of two or more slices of bread with one or more fillings between them.” But the Double Down, my friends, is not a sandwich. It’s something entirely different, requiring a name that truly expresses the contrivance. I choose to call it a “meatheap.”

The very first time I heard about this meatheap, I honestly thought it was a joke. Some half-cocked viral marketing scheme cooked up by hip young ad agencies trying to make waves on the interblogoTwitFace. But then I heard about the test markets in Nebraska and Rhode Island, where people were actually buying and consuming these things. I knew at that moment — somehow, someday — I would consume a Double Down Sandwich Meatheap.

I’ve always had something of a penchant for test-driving awful fast food products. I generally find they manifest themselves as burgers with a few extra iterations of the meat-cheese-bacon loop (see the Burger King Quad Stacker and the Wendy’s Triple Baconator for examples of what I’ve shoveled into my gullet over the years.) But the Double Down struck me as something more… exotic. It was fresh and new and exciting and something I MUST HAVE RIGHT NOW.

My chance came this week, when KFC finally rolled the Double Down out nationwide. Opinions seemed to vary between “that’s the most disgusting thing I’ve ever seen / who would eat something like that? / this is why the rest of the world hates us” and “OMG I LOVE THIS THING.” I decided not to run out on the first day and buy one, instead waiting a few days to give the staff some time to get used to making them. It’s just not a true fast food experience if the food doesn’t look like it was haphazardly thrown together by somebody paying little or no attention to what they’re making.

So last night, having suppressed my craving for this abomination long enough, I began my walk to the KFC at 14th Street and 2nd Avenue. From across the street, a window ad for the Double Down shone like a beacon, drawing me ever closer. I almost ran right in front of a cab while absentmindedly jaywalking towards it. I opened the front door and was greeted by a thick, oddly humid blast of KFC-scented air. I inhaled deeply, trying to savor the unique aroma of heavily processed meat, undisclosed spices, and harsh sanitizer solution. 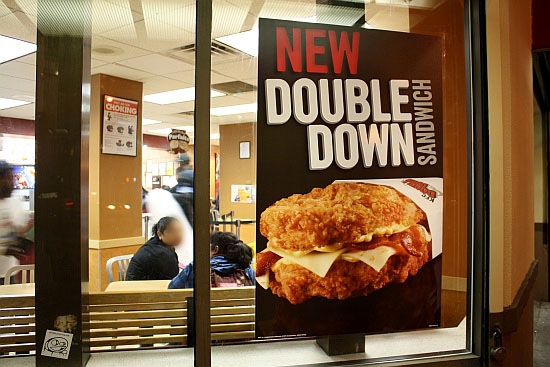 The restaurant wasn’t very crowded, maybe four tables occupied in total. Most of the patrons were eating standard KFC fare — corn, biscuits, chicken limbs from a bucket, and so on. Nobody had a Double Down, though. A brief burst of panic raced through my mind… Were people against the meatheap? Was I going to stick out like some kind of traitor in the midst of all these low-carb calorie-counting Manhattanites? Or worse, was the restaurant out of one of the critical ingredients? I had waited too long and traveled too far to be defeated now.

Part II: “I’m gonna have to try the Double Down Combo.”