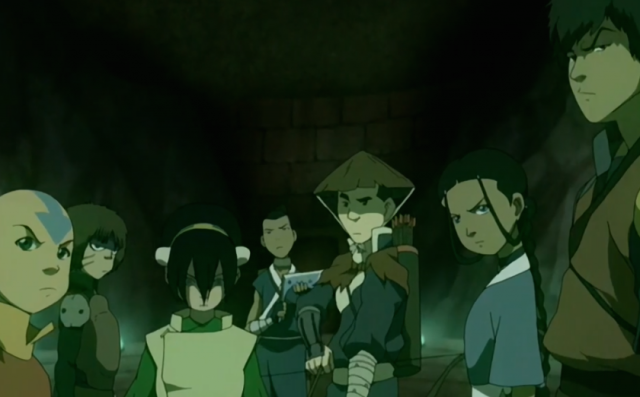 We go from tearbending angst to animal abuse to complete and utter creepiness the variety of which I did not expect to find in a show on Nickelodeon. Avatar is on a roll.

It’s time to catch up with the Aaang, which is flyering Ba Sing Se in an attempt to get any information about Appa’s whereabouts. Sokka, he’s… he’s helping: 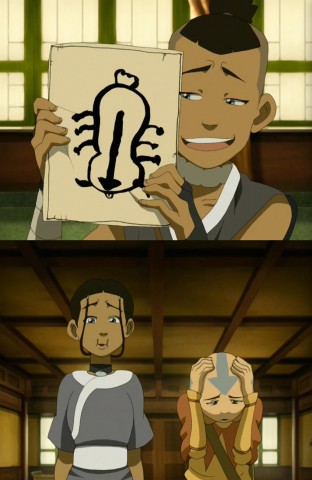 Well, he has the soul of an artist, anyway.

Afterwards they’re confronted by Stepford Joo Dee, who completely denies having been arrested for not keeping a close enough eye on them back in the days before shit got really dark. Instead, she says she just took a short vacation to Lake Laogai, which doesn’t sound ominous at allllllllll. Oh, and you’re not allowed to post “missing” flyers for your lost animals. Sorry. Them’s the rules. 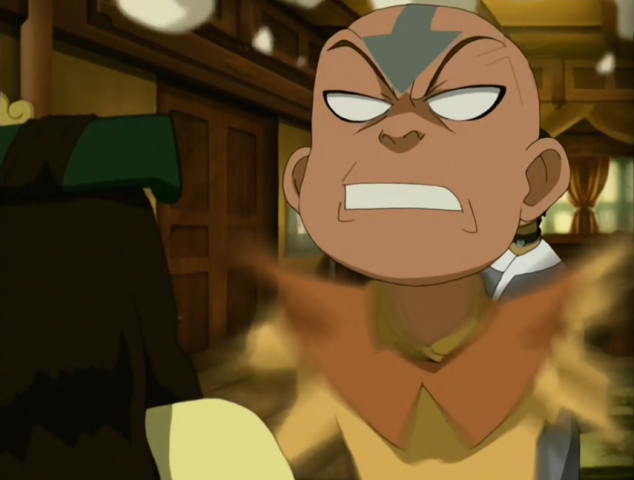 Toph thinks this is the best thing ever, and gleefully busts a hole in the wall of their home. Toph. Some minimum-wage Ba Sing Se contractor has to fix that. Does no one think of the contractors?!

Oh, and as if anyone doubts this by now, they’re being spied on: 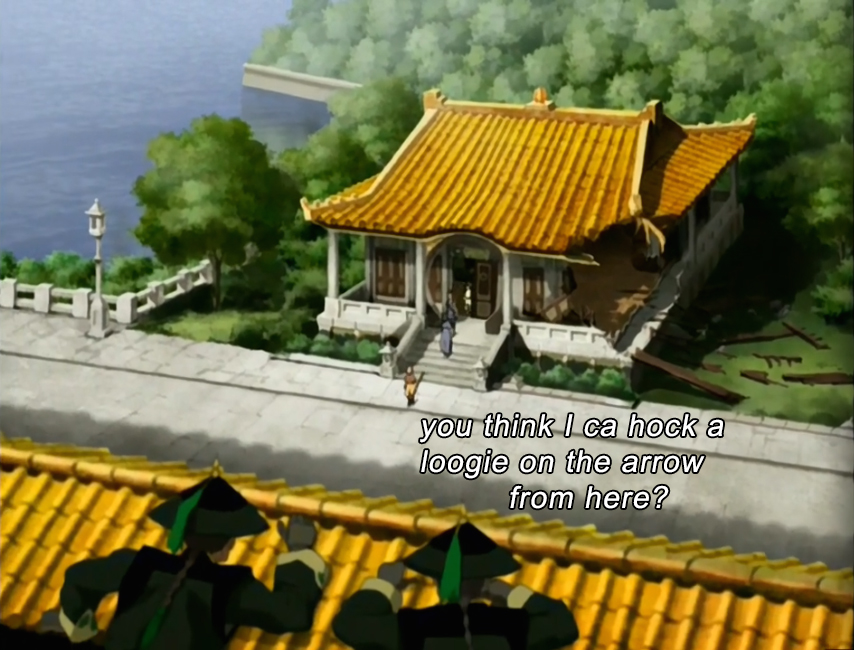 And then I’m feeling bad for Joo Dee, who’s genuinely upset and scared when Long Feng confronts her about letting those meddling kids paper the city with flyers like the littering hooligans they are. He utilizes a trigger phrase—”The Earth King has invited you to Lake Laogai”—which turns her into a robot, basically. It is, pardon my language (though I think we’re past that, dear readers), creepy as shit.

To counteract the creep: Iroh and Zuko! The former’s having the time of his life in Ba Sing Se. The whole city’s buzzing about his tea prowess—it would basically be the best thing that could ever happen in his life, IF HIS SON WERE STILL ALIVE—and two fancypants businessmen come in to offer him his own tea shop. Zuko’s basically a little shit about it. Then he sees one of Aang’s flyers, and: 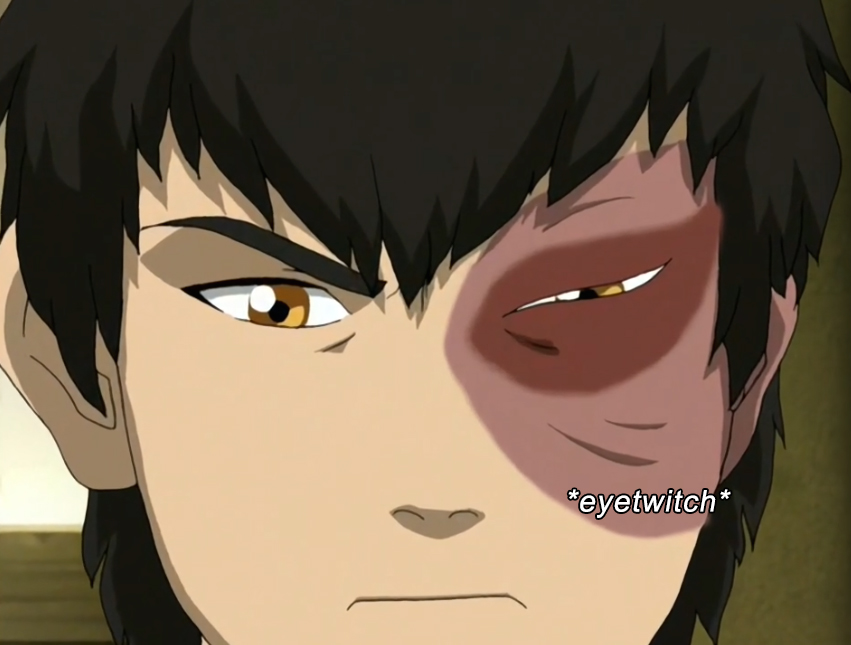 He gets all DRAMATIC about Aang still being in the city, and bison-less at that. Zuko, let it go. Iroh says basically the same thing, arguing that they have a good life in the city and responding to Zuko’s protestation that serving tea isn’t the life he wants with “Well you’d better figure out what you DO want then, huh? Do you want to be a professional juggler? Do you want to be an investment banker or join Chippendale’s? It’s been almost a season that I’ve been dealing with this. Get your shit together.”

Elsewhere in the city, the Gaang is confronted by Jet, who attempts to convince an outraged Katara that he’s totally on the straight and narrow now—he’s left his wannabe Robin Hood days behind and only wants to help. She’s not buying it: 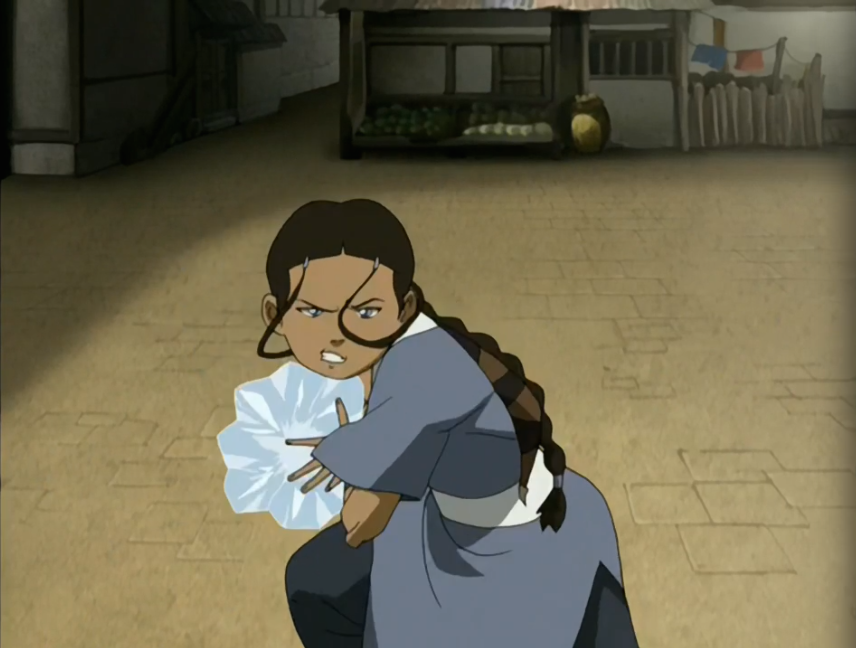 But (my unexpected Jet feels continue) the bitch of it is that he is lying to Katara—he’s not there to help them find Aang—but it’s not his fault that he’s lying, because he was brainwashed by Long Feng to be his secret agent and get Aang out of the city. His objective is to fuck over the gaang, and he doesn’t even know it.

My feels for Jet, more than any other character, have done a complete 180. I didn’t feel bad for Zuko at first like I do now, but at least I liked him for being a semi-incompetent dork.

Anyway, Toph’s earthbending skills make her a human lie detector, which is pretty cool. So they figure out that Jet’s telling the truth, and they go to a warehouse where Jet says he heard Appa was being kept. A janitor tells Aang Appa was sold to someone on Whale Tail Island, which is almost all the way back to Sokka and Katara’s home on the water temple. Everyone’s all ready to drop Ba Sing Se like a hot potato and go get him… until Smellerbee and Longshot make a convenient appearance and ask Jet: “Hey, what’s with that thing where you were arrested?”

It’s Sokka who figures out, “Waaaaaait, have you been brainwashed?” He tries to jog his memories by way of giving him a douche straw: 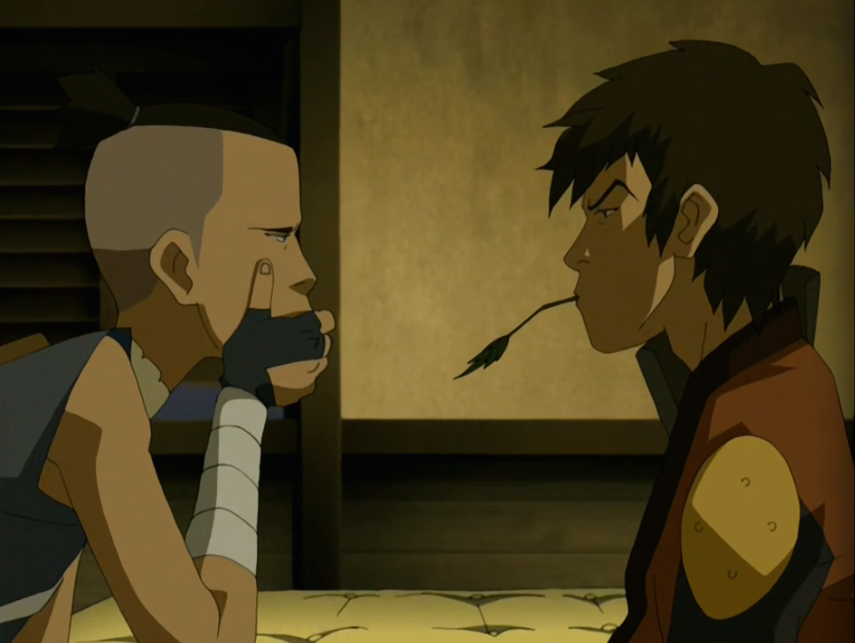 …but it’s Toph and Smellerbee who figure out that he should think of the Fire Nation murdering his family as a way to jog his old memories. Well, if anything’ll work, traumatic childhood memories would be it. They prove a little too traumatic until Katara uses her waterbending healing magic to heal the inside of his head a little (she can do that? Where did she learn to do that?!), making the memories more easily accessible.

He tells the crew that he was taken to Lake Laogai, and off they go, easily finding the underground tunnel and sneaking around the place where the Dai Lee makes all its Stepford Humans. Jet says he thinks he might know where Appa is. Cut to Appa, alone and chained up in a big room, the door of which is being opened. Cut to…

THAT WAS A  DICK EDITING MOVE, AVATAR.

The gaang, in a different room, gets attacked by Earth Kingdom soldiers with these rad stone gloves as weapons.

Underground bunker? Earthbending soldiers? I don’t need to tell you who the MVP of this fight is: 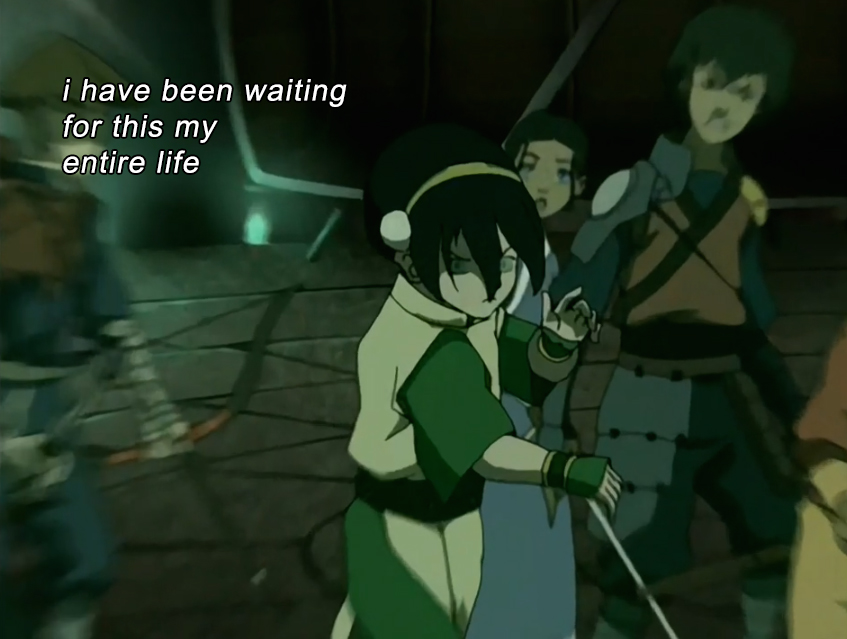 Still, they’re a group of kids—if unusually violent ones, god damn—against a group of trained, adult soldiers, so they have a rough go of it. Long Feng lures Aang and Jet into another room and gives the former an ultimatum: leave the city now, and you’ll get your bison back. Jet (YEAH, JET!) tells Long Feng’s he’s in no position to bargain, which he totally is, but hey, hotheaded. Long Feng uses the trigger word and orders Jet to attack Aang, who manages to break through his programming by reminding him of his life’s true purpose: That he’s a freedom fighter, and he fights for freedom with his freedom fighter buddies.

Speaking of recognizing one’s true purpose: Iroh has followed Zuko to the underground bunker, and HO SHIT is he pissed that Zuko’s still hung up on this “capture the Avatar” thing. “I HAVE NEVER IN MY LIFE YELLED AT A NEPHEW LIKE THIS,” he screams. “I WAS ROOTING FOR YOU. WE WERE ALL ROOTING FOR YOU. HOW DARE YOU.” He begs Zuko to figure out his own path instead of following the one his father laid down for him, because Zuko’s quest to find the Avatar has almost gotten him killed multiple times, a result of Zuko’s reckless disregard for the value of his own life.

WHAT THE FRICKLE FRACKLE, AVATAR.

It’s not 100% sure that Long Feng killed Jet—we only see him get seriously injured, with a crying Smellerbee and Longshot gathered around their dying friend. He says he’ll be fine, but Toph can tell he’s lying. Since we don’t see him die, there’s room for denial… but I can’t help but think the whole “not showing a teenage boy slowly perish” has more to do with this being a kid’s show than him actually being alive. 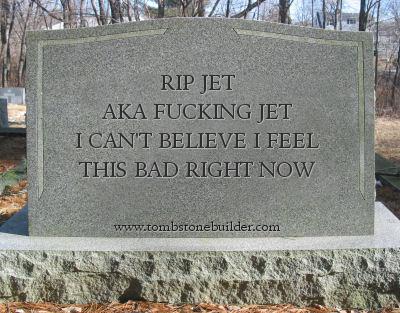 Toph, Katara, Sokka, and Aang, get to where Appa was, but he’s gone. So it looks like Zuko did take him. They get attacked by guards and are chased out of the bunker, when should should rescue them but… 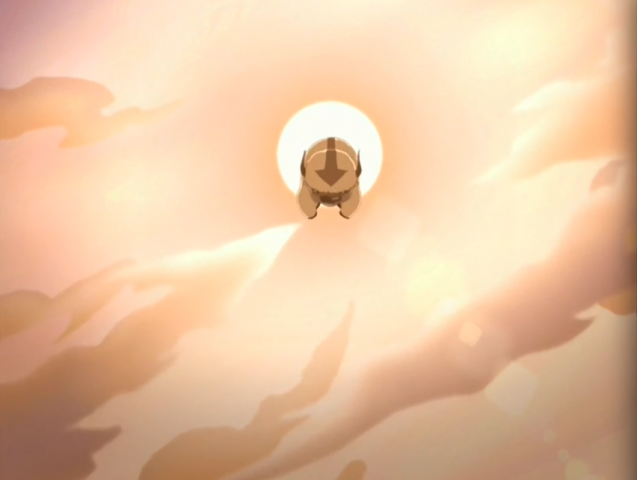 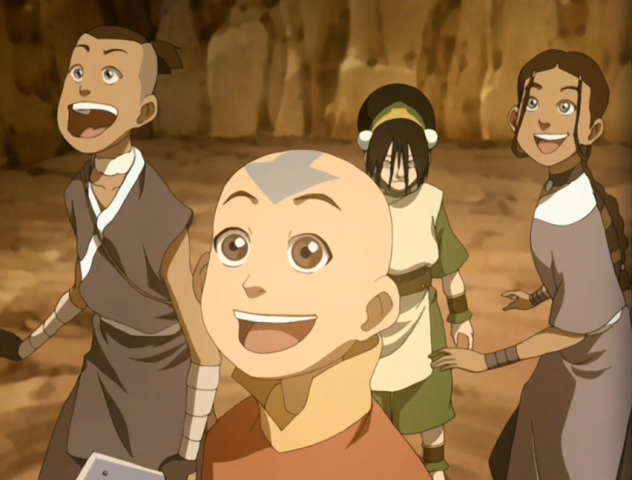 Aang busts up some Earthbenders and skips Long Feng across the lake like a rock. There’s a glompfest reunion, complete with crying Aang and crying viewers everywhere. Team Avatar flies off into the sunset, with Zuko and Iroh climbing out of the bunker below. Zuko, having finally (finally)! reached a decision, throws his Blue Spirit mask into the lake.

And Team Avatar doesn’t even know it.