This used to be a happy kid's show. 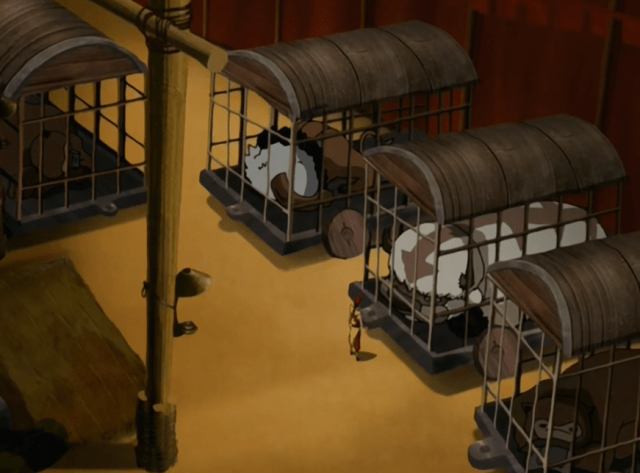 Hello and welcome to the new Friday edition of Avatar: The Last Airbender newbie recaps. Last week’s episode (singular, because I need emotional space for both these two) was a heartbreak and a half. Surely this episode will be easier to get through?

We start off with Appa getting kidnapped by the douchebag son from “The Desert” and his douchebag crew. Added to the awfulness—the son sells Appa to “those beetle-headed merchants.” And the merchants have helmets that look like beetles, but you just know that “beetle-headed” is a slur in the ATLA-verse. It’s the way that he says it. And also the fact that he’s a dick.

Appa, tied to a giant beetle (yeah OK), hears Aang’s bison whistle—this is the point in The Desert when Aang’s split off from the group so’s he can look for his buddy—and tries so, so hard to break free. And he almost makes it, too! Only he gets tranqed. Aang was SO CLOSE.

I think I’m going to be using a lot of crying gifs this recap. Get ready.

From the merchants, Appa gets sold to a sadistic circus trainer who says things like “you probably felt you had no choice but to behave outrageously, like a wild animal. But don’t worry, you won’t anymore. Because I’m going to break you.” 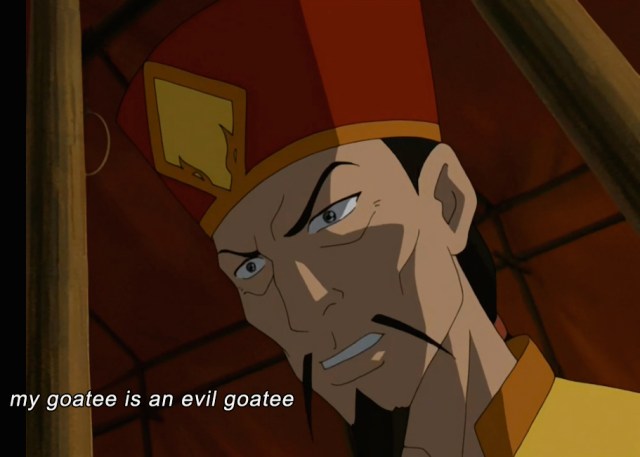 Appa, of course, just wants to eat some food and find his buddy Aang and be happy, why is he not happy, why can the writers not let him be happy?! SADISTS! But the trainer, who’s also a firebender, withholds food and burns Appa when he has the gall to get some for himself. As if that’s not bad enough, Appa befriends a little kid who’s attending the circus with his clearly awful father, who tells the child to stay away from Appa “or you’ll regret it.” Oh, nice. Appa’s treatment is a parallel to the implied—but clearly obvious—child abuse this little kid faces.

I want this episode to stop now.

Appa’s dressed up in a humiliating costume and whipped with fire so he’ll perform, but with the encouragement of the little kid, who reminds him of Aang, Appa bears the trainer with his tail and flies to freedom.

Appa flies around looking for Aang for a while, tired and hungry and still in shackles. He eats a cactus, but instead of Appa-hilarious-high-on-cactus-juice we get Appa-hurt-with-spines-in-his-tongue, because this episode’s not going to let up on a chance to fuck with us. He eventually find shelter in a barn, where he dreams of the first time he met Aang. I’m going to take a break from the pain and point out BABY SKY BISONS: 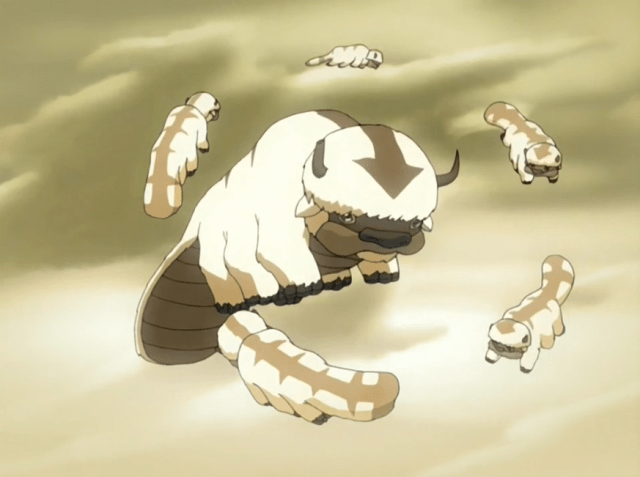 Across town, Aang’s also dreaming about his first meeting with Aang, because they have that psychic connection that’s only causing me pain right now. “I guess this means we’ll always be together!,” exclaims flashback Aang.

Aang’s woken up by a farmer dude, who sees what looks like a scary monster chilling in his barn. Of course, the reason Appa looks so terrifying is that he’s been starved and abused, and he’s also suffering from some major trauma as a result of being, y’know, tortured with fire. So he doesn’t exactly keep his cool when the farmer comes in with a torch. 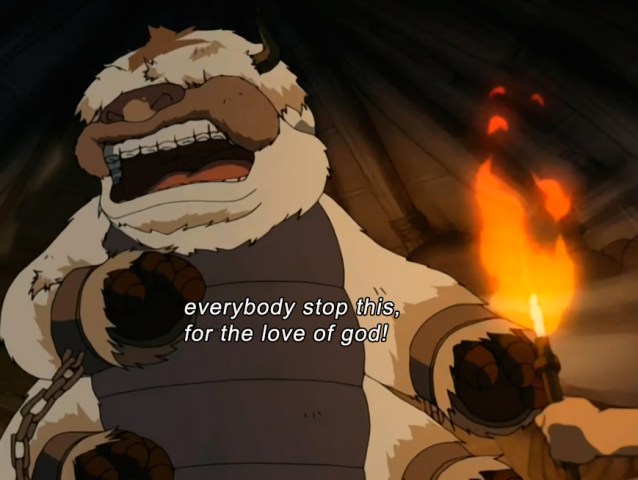 Appa’s chased away and ends up flying over Zuko and Iroh’s boat. Iroh sees him, but doesn’t tell Zuko “Hey, I might’ve seen the Avatar just now.” Because Iroh has no way of knowing Appa and Aang aren’t still together. So him not telling Zuko is a way of protecting him—it’s willfully keeping knowledge Zuko might want away from his nephew, because he knows finding the Avatar is no longer on his path, even is Zuko himself doesn’t.

How is an episode that doesn’t even have Zuko in it giving me Zuko feels?!

Appa, who just cannot catch a break, crash lands and is attacked by a boar. Appa wins, but he’s seriously wounded. And that’s when it looks like something good happens—Appa is found by Suki, who recognizes that he’s been abused and is there to help him oh my God. She and her fellow Kyoshi Warriors clean him, feed him, remove his shackles, and tell him that they’re going to find Aang. 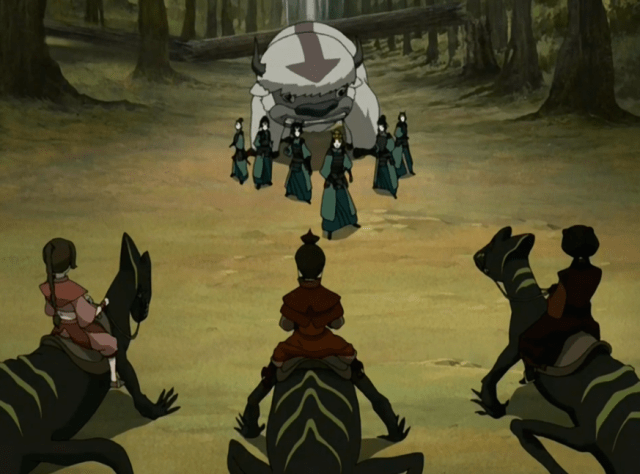 Dammit, Azula! I love you, but I DON’T WANT YOU HERE NOW.

Turns out they followed the trail of Appa’s fur. “My, my, you’re easy to find,” Azula taunts. “It’s really astounding my brother hasn’t captured you yet.” Which, fair.

She figures out that it’s just Appa there by himself, but it’s OK, she’ll just take him. So then it’s a fight between Ozai’s Angels and the Kyoshi Warriors.

It’s EVERYTHING I COULD HAVE EVER WANTED… until Azula recognizes that Appa’s afraid of fire and uses it against him. Suki, determined to get Appa out of harm’s way, uses fire as well to get Appa to skedaddle, much like the way Arya had to throw rocks at her pet direwolf Nymeria in Game of Thrones to get her to safety. They’re just animals! They don’t understaaaaaaand!

We follow Appa away from the battle, because this is Appa’s episode and all, which means WE DON’T KNOW WHETHER SUKI IS STILL ALIVE. I’m confident that Azula is, because they wouldn’t kill the season big bad like that, but… Suki? You okay? SUKI?! I don’t think they’d kill her, but this show’s been brutal lately, so I don’t know.

Appa’s spotted by a dude on a Water Nation ship who… miiiiiight be Bato? Even if he’s not, we probably just saw the ship Katara and Sokka’s dad is on. I’m too emotionally wrung out by this point. I can’t. This has been a rough 22 minutes.

And it’s not over yet. Appa flies to the Eastern Air Temple, where he meets Guru Patik, who said he had a vision of helping Aang, so he’s been expecting Appa for a while now. Appa gets a much-needed respite from all the shit he’s had to put up with this episode. Patik understands that he’s a traumatized animal and treats him with the patience and understanding he should. Only fitting for a guy who cavorts with animals like he’s a Disney princess: 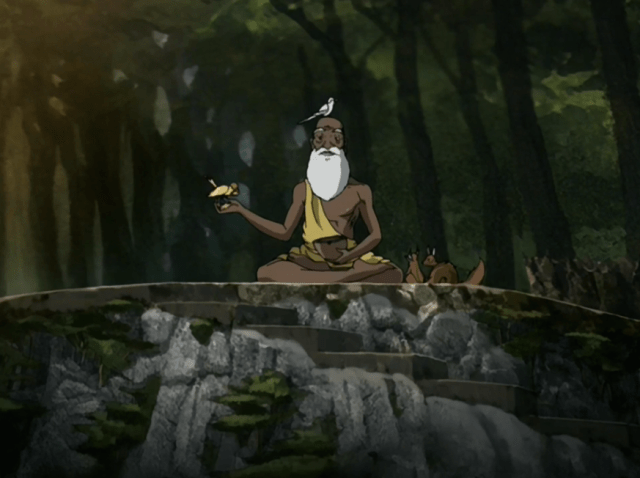 After a few days Appa’s well enough that he can set off to find Aang and deliver a message from Patik. To help him along, Patik taps into their shared energies and finds out that Aang’s in Ba Sing Se. So off Appa goes. Surely, after the two episodes we’ve had, “Appa’s Lost Days” will end in Aang and Appa being reunited, right? And not, say, Long Feng capturing Appa as soon as he arrives in the city. Surely, right? I need that. And I feel like I deserve it.