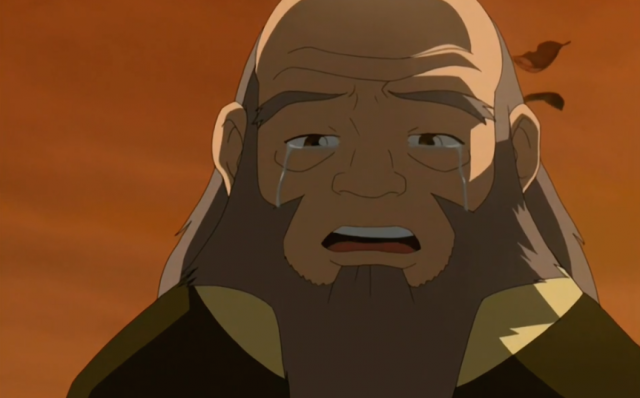 For reasons of emotional turmoil, I’m only recapping one Avatar episode, “The Tales of Ba Sing Se,” this week. If you’ve seen it and next week’s episode, “Appa’s Lost Days,” you’ll know why I need a break in between.

This episode takes the form of six short vignettes. None of ‘em advance the plot all that much, but boy, did they hit me in the feels machine. I’d been warned. I WAS READY:

ATLA. Tales of Ba Sing Se. Let’s do this. pic.twitter.com/2Q1gE9rzw1

First up: “The Tale of Toph and Katara.” Toph is not necessarily the easiest person to get along with—she’s a bit prickly, a bit closed off—but screw it, Katara decides they’re going to be friends or so help her. To that end, Katara says they should have a “girl’s day out” at a spa, and even though Toph is initially all “Do I haaaaaave tooooo?,” she tags along after a relatively small amount of prodding. It’s almost as if she wants to be friends with Katara, even though spas aren’t her thing at all.

Slight kerfluffle when the spa ladies get rough on Toph’s feet aside, the spa day actually turns into a pleasant bonding experience. Toph feels good and GIRLY, MOTHERFLIPPER. Then. Mean girls. 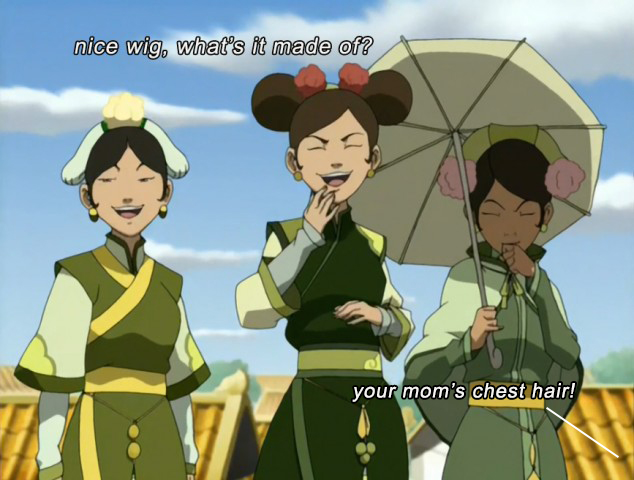 This trio of complete and utter pantywaists give Toph hell about her appearance, which Toph is not AT ALLLLLLL ready to let go. So she and Katara dump ’em right into the river. Even though she puts up a badass front, it’s clear that the bullying bothered Toph—which probably isn’t something that she would have admitted to Katara a few episodes ago, so yay for character development! Katara says she admires Toph’s strength and self-assurance and tells her, “I know it doesn’t matter, but… you’re really pretty.” Toph said she would return the compliment if not for the whole being blind and not knowing what Katara looks like thing.

Hell yeah, this is the show that used the word “sexist” in the first few minutes. SISTERS SUPPORTING SISTERS.

So, vignette one: assholes bullying a small blind child. IT ONLY GETS WORSE FROM HERE.

“THE TALE OF IROH.” LET’S DO IT. The basic thrust of this vignette is that Uncle Iroh brings flowers and sunshine wherever he goes. No, really. He tells a merchant where best to place a flower so it will bloom. He plays earthbending soccer with some kids. He sings a song to a crying infant and OH HELL NO, I SEE WHERE THIS IS GOING:

Ohhh, he’s singing a song about a “brave soldier boy” that he probably sang to his dead son, NO I’M FINE. — Rebecca Pahle (@RebeccaPahle) September 14, 2014

He also gives a would-be mugger tips on his stance, then engages him in what’s basically an impromptu therapy session that ends with the thief leaving behind his life of crime in favor of pursuing his dream of being a masseur. “No one has ever believed in me!,” he says. “While it is always best to believe in oneself,” Iroh responds, “a little help from others can be a great blessing.” It’s all happy and fun and good…

…until a sobbing Iroh sings that song from before to a shrine for his dead son, whose birthday it is. “If only I could have helped you,” he says.

FUCK EVERYTHING. EVERYONE HAS TO FEEL MY PAIN:

And if that’s not enough… what’s this? 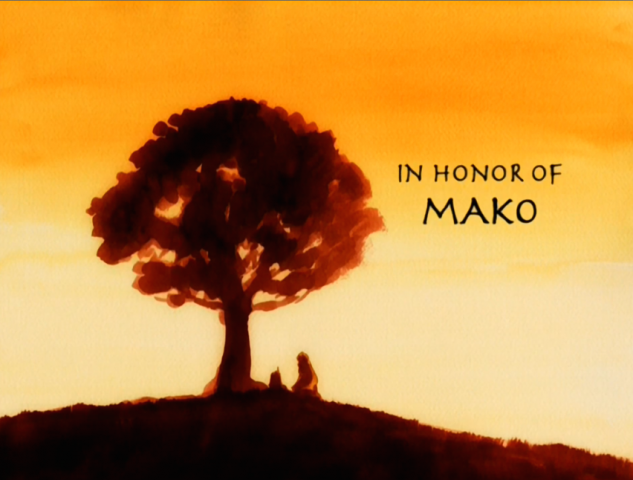 SonofaBITCH. RT @PaulFerence: @RebeccaPahle Also, that was dedicated to Iroh’s voice actor who died of throat cancer. So… yeah.

I need a break after that emotional gutpunch. DANCE PARTY.

OK, now to “The Tale of Aang.” Surely after the torment we just experienced, we’ll get something happy and fun, right? HA. This vignette starts off with CAGED, NEGLECTED, HUNGRY ANIMALS. FUCK YOU, AVATAR.

Aang gets the animals outside the gates and uses his earthbending skills to create a nature preserve for them. Kids come a’running, and everything’s good for once. There are even cute baby animals. OK, Avatar. You’re back off my shit list.

The next vignette is literally just Sokka engaging in a rap battle, but with haiku. No, really. That’s all it is. He crashes through a window into a… poetry school?… and engages in a poetry slam with the teacher, giggling students looking on and oooohing when one or the other delivers an appropriately-syllabled burn. It fills me with joy. I needed that.

What I also needed: Zuko’s entire vignette to be about him going on a date.

Bless you, Jesus, Mary, and Joseph.

Zuko is convinced that this girl at the tea shop knows about him and Iroh being firebenders, though it’s obvious to us that she just wants a piece of that broody man-meat. The girl, Jin, gets proactive and asks Zuko out. Iroh accepts on his nephew’s behalf, because The Zukes has gone thoroughly Blue Screen of Death. 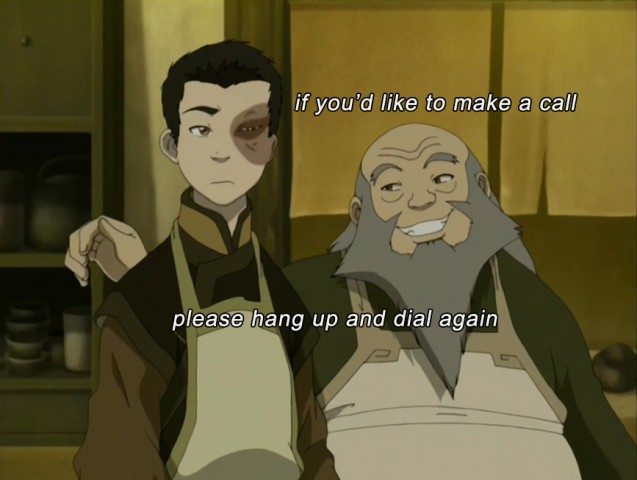 So… the date. It’s awkward, due to Zuko not being able to say anything about his background (he ends up saying he used to be a circus juggler). Also… he’s Zuko. He’s an emotionally stunted cupcake, and the majority of social interaction he’s had with people his own age has involved either him trying to capture them or them trying to capture him. It’s not the stuff great first dates are made of. Plus, his hair: 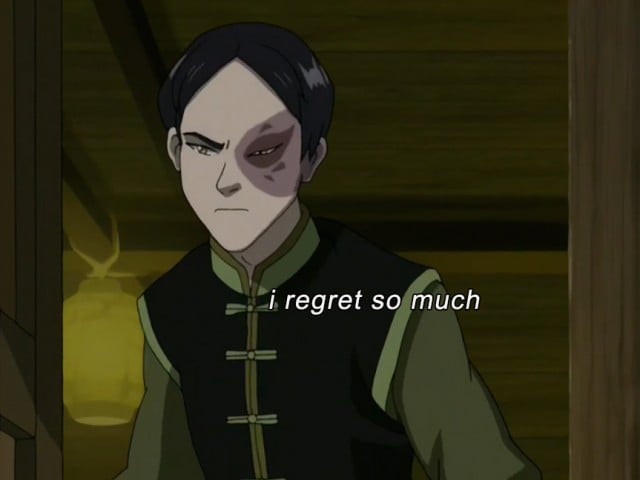 That said, it’s not awful. It’s really sweet to watch, actually. Jin takes Zuko to her favorite place in the city, a fountain/lantern display that’s sadly been turned off for the evening. So Zuko gets Jin to close her eyes and lights the lanterns for her. That’s huge for him. This guy who used to be obsessed with not getting close to people so they won’t know he’s a firebender—who was just able to bring himself to firebend to save someone’s life a few episodes ago (and who got burned for it, though not literally)—risked being outed as a firebender to please a nice girl he barely knows. He gives her a coupon for a free cup of tea like the DORK THAT HE IS. There’s a little kissage, followed by the requisite angst—he shuts down and tells Jin he has to go before running away to hole up in his bedroom. He does, however, admit to Iroh that his date was “nice.” He’s emotionally compromised, and so am I.

OK, last vignette—THE TALE OF MOMO, aka the only one that has any bearing on the plot (that we can tell). You start off by seeing that Momo really, really misses Appa, and he keeps looking for him, because your emotions haven’t had enough of a pummelling already. He’s attacked by… feral street panthers? Or something? Whatever… and they all end up getting captured by some humans who are totally gonna eat ’em. Momo opens the latch on his cage, because he’s clever, and then he saves the panthers as well, because being kind to people even when they’re supposedly your enemies is one of this show’s Things. The panthers steal the hank of Appa’s fur that Momo’s been carrying around to comfort him (ow, my heart), and they lead him to…

…OH MY GOD DO THEY LEAD HIM TO APPA?!

Well, no. They lead him to one of Appa’s footprints, which is nonetheless closer than anyone in Team Avatar has so far managed to get to Appa. And it’s Momo who got there. Because of friendship and kindness! Fuck yeah!

And, because this episode wants me to feel bad about the world, we end with Momo—not having realized he’s found a key to Appa’s whereabouts, because he’s a damn lemur—laying down in the puddle all sad as the sky opens up and rains on him.

Nothing about this episode is remotely acceptable. Ditto next episode—I’ve watched it, but I’m waiting to recap until next week. If Appa can wait to be reunited with Aang, you can wait for seven more days. For now, fuck everything, and fuck you, Avatar*. This is me:

*I mean this in the best way possible.