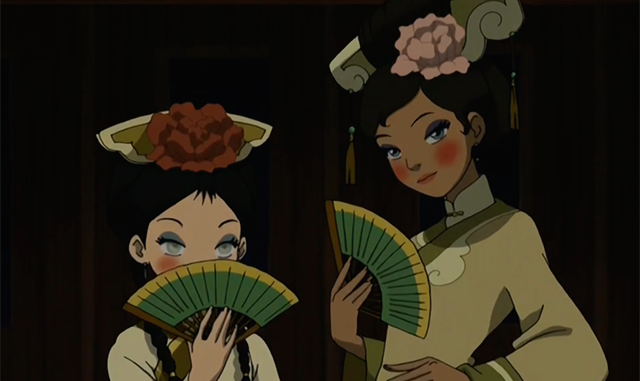 Let’s pick it up right where last week’s cliffhanger recap left off, this time with added Azula. I’ve missed you, baby.

We start the episode in the command center of the Fire Nation’s drill, which is schlepping its way to the walls of Ba Sing Se. War Minister Ching is convinced that the drill is invulnerable—metal shell, scientific marvel, blah de blah—but all the same Azula orders Mai and Ty Lee to go take down the earthbenders approaching it. Mai’s all excited at the opportunity to do violence. I feel ya, girl.

Meanwhile, Aang’s picked up the rest of Team Avatar and, with Toph’s earthbending help, gets them to the top of the wall so they can witness the drill coming their way. The general in charge of the wall is all “Pahhhh, everything’s fiiiiine! Look, we have our Terra Team ready to take down the… ah… are those… two teenage girls?”

Ty Lee does her pinchy magic, and Mai’s all

…and those two teenage girls—WHO AREN’T EVEN BENDERS—take out one of the Earth Kingdom’s elite fighting squads without breaking a sweat.

So the general admits that maybe they do need some help from the Avatar, and everyone turns to Sokka, who’s become the group’s unofficial “idea guy.” It takes him a little bit, but eventually he comes upon the idea of sneaking inside the drill and smashing at its weak points. They manage the first part of that with some help of a dust cloud Toph whips up. The face Azula makes when the War Minister tries to tell her “Ohhh, that’s probably nothing!” is glorious, as is the rest of Azula’s everything: 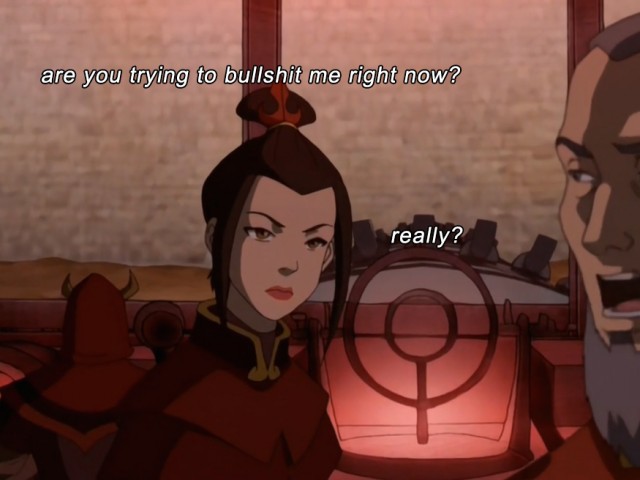 He and Iroh have gotten to the other side of the lake, where Iroh flirts his way through customs, much to Zuko’s eternal disgust. FUCKING JET has some major-league hearts in his eyes and is determined to make Zuko one of his freedom fighters, even though Smellerbee rightfully points out that their “freedom fighting” days are supposed to be behind him. It’s a moot point, as when FUCKING JET comes up to Zuko all

Zuko heaves this mighty sigh that I choose to interpret as “Ugh. THIS SCHMUCK.” And then when FUCKING JET asks if Zuko wants to join his boy (and Smellerbee) band, Zuko declines, because to say yes would be a decision too stupid even for him.

Then, as FUCKING JET walks away, he sees Iroh use firebending to heat up his tea. Smellerbee and Longshot don’t believe him when he says Iroh and Zuko must be firebenders, though of course we know he’s right. His last scene of the episode sees in his way to the city, determined to expose Iroh and Zuko.

But back to the drill.

Sokka uses a clever ruse to get the schematics and figures out a way that Aang and Katara can use waterbending to cut through the metal braces keeping the drill together. It’s a solid plan—and how cool is it that Katara and Aang can cut through metal with water—but they don’t have enough time to fully execute it, and before long the drill reaches the wall and starts making its way through. Everybody in the command center is cheerful, except for… wait for it… 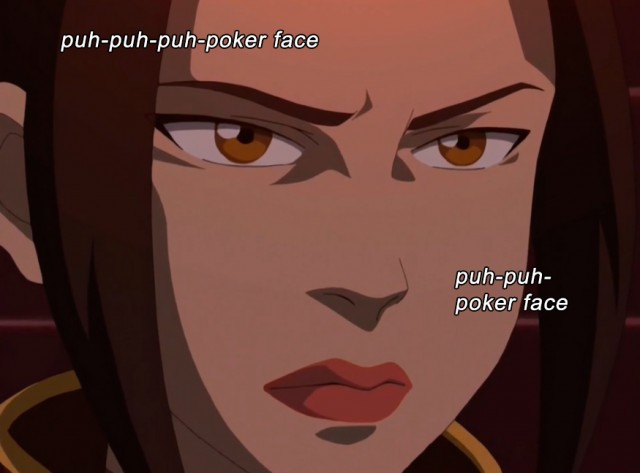 Aang remembers some earthbending wisdom Toph threw at him and comes to the conclusion that, instead of cutting through every brace, they should weaken every brace and deliver a killing blow from above, which should cause the drill to fall apart under its own weight. (And of course Toph, who’s tiny, would  have a fighting style that relies on using her enemies’ weight against them. I love the consistency in this show.)

That’s when the War Minister figures out that some people have snuck into the drill. That’s right, be scared of Azula! 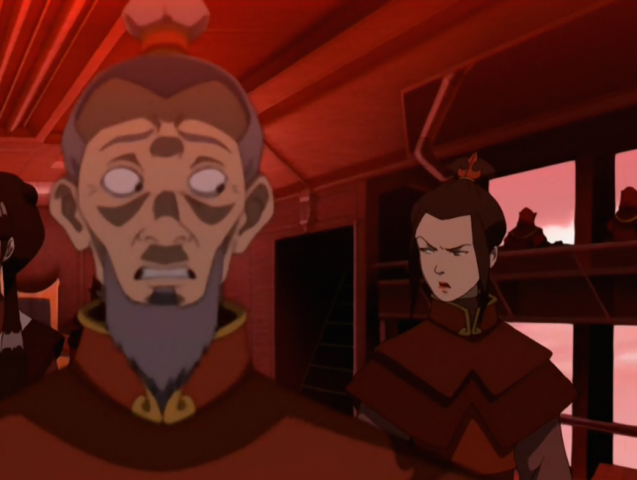 Mai and Ty Lee go after Katara and Sokka, but Mai punks out when the chase goes through a slurry pipeline, and wow, I never thought I’d hear the word “slurry” so much in a single episode. Katara and Toph bend the water/earth mixture back into the drill, which has the dual advantage of keeping Ty Lee at bay and building pressure in the drill, which will make Aang’s final blow that much more effective.

…if he could deliver it, that is. Because AZULA. There’s a solid fight scene where Aang uses water, earth, and airbending against Azula’s lightning, and damn, when he picks up that fourth element he’s going to be unstoppable. Aang also makes an offhand comment about how he wishes he was a metalbender. Wait, I thought Toph was the first metalbender? Why is that a thing I think I know?

Predictably, Aang juuuuust barely pulls out a win and manages to destroy the drill before it does too much damage. But I think Azula’s the real winner here, because check out how she can kick rocks out of the air! 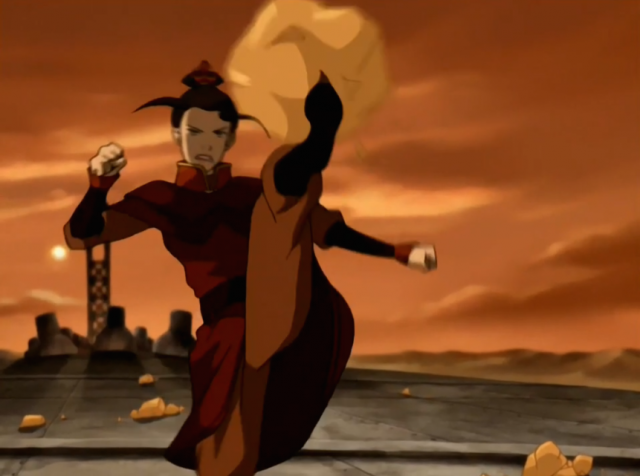 “City of Walls and Secrets”

AKA “oh hell no I am NOT feeling sorry for FUCKING JET.” But I kind of am by the end of the episode. How did this happen?! Let’s begin:

The gaang takes the Ba Sing Se MTA (“Stand clear of the falling rocks, please!”) into the city, where they’re met by their “tour guide” Joo Dee. “Tour guide” is in quotes because Toph immediately points out that Joo Dee’s more like a handler, there to make sure they don’t stick their noses somewhere they don’t belong. Like: asking what’s up with all the class inequality in Ba Sing Se, with the refugees and other poor folks walled into what’s basically a ghetto; asking where the black market is, so they can find out who might’ve purchased Appa; and, oh yeah, when can they meet the Earth King and tell him about the solar eclipse that’s going to make it possible to defeat the the Fire Nation? There’s also the Dai Le, Ba Sing Se’s “cultural authority,” which they’re told in very uncertain terms not to even think about.

They’re told they won’t be able to meet with the Earth King for another six to eight weeks, which is all kinds of shady. To take matters into their own hands, they decide to crash a society party and hopefully meet the king that way. Well, Toph and Katara will crash it–Sokka and Aang can’t pull off the required sophistication.

(There’s also a delightful moment where the gaang tries to figure out what a “bear” is. Not a platypus bear… or a skunk bear… or an armadillo bear… or a gohper bear… just a bear. The conclusion: Ba Sing Se is weird.)

Katara and Toph play up the “innocent girl in need of protection” schtick to get a random guy named Long Feng (voiced by Clancy Brown with his dulcet, menacing tones) to escort them into the party. Only the guy’s not so random after all: He’s the cultural minister to the king, and he knows something’s up with them, because he refuses to let them out of his sight once they’re in. Sokka and Aang manage to sneak in as busboys, though Aang blows his cover when he spills food on someone and airbends her dry. In typical gaang shenanigan fashion, Aang distracts everyone with stupid tricks… 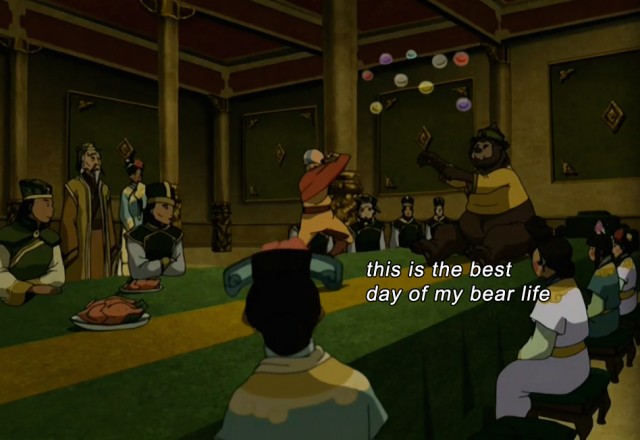 …so Katara, Sokka, and Toph can secure an audience with the king, who’s being brought in on a litter. But Long Feng’s all 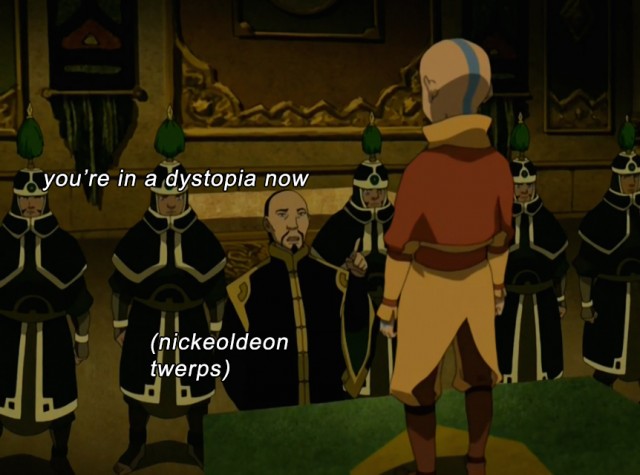 and escorts them away to the library, where he explains that the king is a mere figurehead and he’s the one in charge of all military decisions. Oh, and he’s not interested in the solar eclipse intel that could literally win the war for the Earth Kingdom.

That’s all relatively normal kid’s show stuff—kid main characters want to do a thing. Adult doesn’t want to do the thing. Kids have to use the power of plucky ingenuity to convince The Man that being an adult doesn’t always mean you know best. Fine. But there’s an extra element here that’s way darker: Long Feng explains that it’s illegal to even mention the war with the Fire Nation, as to acknowledge its existence would send the citizens into a panic. “In silencing talk of conflict, Ba Sing Se remains a peaceful, orderly utopia,” he explains. And if the gaang tries to convince people that there is a war, well… it’d be a shame if they were to be thrown out of the city and couldn’t find Appa. That is harsh.

Which brings me to feeling sorry for FUCKING JET.

Iroh found himself and Zuko jobs at a local tea shop, where Iroh immediately starts earning himself a reputation as Ba Sing Se’s tea guru. FUCKING JET’s still convinced that they’re firebenders and spies on them to find evidence, even though by doing so he estranges himself from Smellerbee and Longshot, who see in FUCKING JET’s obsession a return to their old way of life.  FUCKING JET even tries to manipulate Iroh into firebending, which doesn’t work because FUCKING JET sucks at life.

So eventually FUCKING JET decides, to hell with it, he’s going to burst into the tea shop and accuse Zuko and Iroh of being firebenders. It’s massively, massively stupid, because he has zero proof, and clearly these guys have been pretty good at concealing themselves so far. The only way they’ll be exposed is if they choose to firebend, which FUCKING JET thinks he can make them do because he’s an obnoxiously-full-of-himself teenage boy.

Literally all Zuko and Iroh have to do is act confused and maybe a little offended, and the guards will deal with the situation. Except Zuko just does not like FUCKING JET at all, so instead of playing it cool he’s like “Fuck it. You wanna go? Let’s go, asshole!” Cue fight scene. Zuko even cuts FUCKING JET’s douche straw: 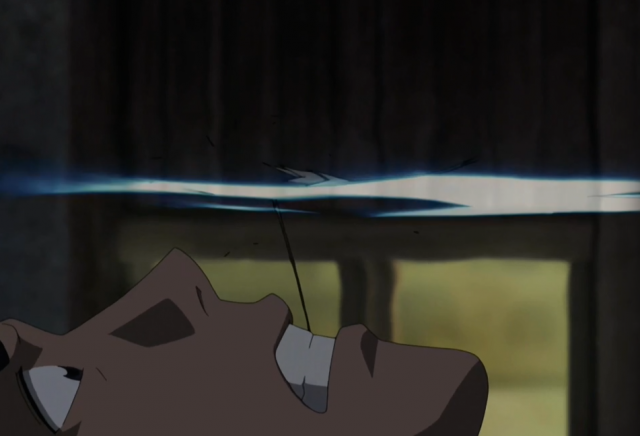 FUCKING JET’s unable to goad Zuko into firebending, and Zuko wins the fight pretty handily, FUCKING JET shouting all the while about how the Fire Nation’s trying to silence him, waaaaaaaah. FUCKING JET gets dragged away and locked up by the police because, as previously established, he is a fucking idiot who doesn’t have two brain cells to rub together.

Except, instead of getting a fair trail, he gets brainwashed into thinking there is no war in Ba Sing Se. Or at least the guards try to brainwash him—we don’t see whether it took, though I’m guessing it did. And here’s the feeling sorry for FUCKING JET thing. He was right about Zuko and Iroh being firebenders, and nobody—not even his friends!—believed him. That makes me emotional! Granted, he has the “firebenders = bad” association locked into his head a little too firmly, but I think most people would be freaked out by firebenders in Ba Sing Se. FUCKING JET displays a distinct lack of empathy and smarts, and (to put it lightly) he’s a tremendous shit personality-wise; but the kid doesn’t deserve to be brainwashed. Because that’s what he is: A KID. AN ORPHANED KID. A CHILD OF WAR.

Oh, and Stepford Wife Joo Dee got brainwashed, too.

Check back next Tuesday for my recaps of “Tales of Ba Sing Se” and “Appa’s Lost Days,” the former of which I’ve been informed will break my heart into tiny pieces.