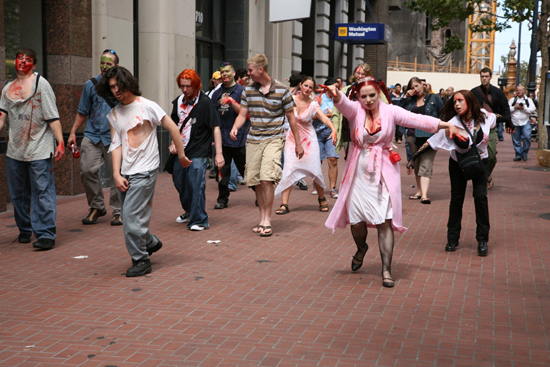 In what will surely leave all other countries green with envy, Melbourne, Australia is to have a one month engagement with a company called I.R.L. Shooter running a game titled Patient 0. But what, exactly, is Patient 0, you might ask? In their own words, it “is a fully immersive live action real life, multiplayer, first person shooter, role-playing game.”  They fail to mention in the sentence that the entire experience revolves around you running around and shooting zombies.

But wait, there’s more. The game is running for a month starting October 31st and though it’s beginning in Melbourne there’s a chance that they’ll take it touring throughout Australia. Those of us elsewhere will just have to continue being jealous. Now, we who can’t attend might scoff at the glorified game of laser tag but it’s more involved than that.

Though they’re using typical infra-red technology found in traditional laser tag scenarios, they’re also designing custom assault rifle replicas so as to make the experience as realistic as possible without breaking the law. A total of six players will enter the zombie-infested building — no more, no less — to solve puzzles, collect information, and generally stay alive.

The sound design, lighting and just about everything else is made up to look as professional as possible with even the zombies being played by professionals. In addition, the custom assault rifle replicas will be running custom software designed to keep track of ammunition, friendly fire and the like. With tickets reportedly starting at $125, I’ve never wished I were Australian as much as I am now. Check it out in this video they released:

UPDATE: The original video has been taken down to be replaced with this one: