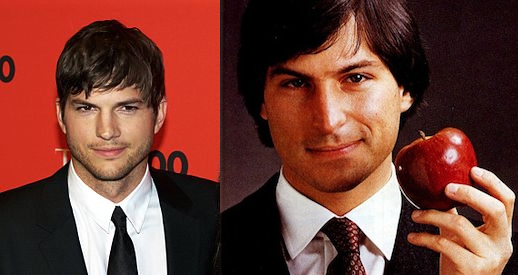 Variety reports that Ashton Kutcher, of That ’70s Show and replacing Charlie Sheen on Two and a Half Men fame, has been cast as Steve Jobs in an indie biopic about the Apple mastermind. The news released yesterday on April Fools’ Day, so instead of haphazardly reporting it, we waited to see if, you know, April Fools. The news seems to be legitimate, however, and though you may not be thrilled to learn that Kelso is playing Steve Jobs, look at the comparison above. Seems pretty spot on to me.

The movie is set to be directed by Joshua Michael Stern, whose most notable work seems to be the 2008 Swing Vote, a movie where an entire election comes down to one man’s vote. The script will be penned by Matt Whiteley. The movie, as one may assume, will chronicle Steve Jobs on his journey to becoming Apple’s co-founder.

For those worried, the Variety article notes that Kutcher gave a decent performance in the somewhat serious film Spread, though as someone who watched that movie one warm summer night on Netflix, it wasn’t any better or worse than any of his other performances, which I’ve never found to be terrible. When you can’t get Daniel Day Lewis to star in your movie, it’s not a bad move to go for an actor who actually looks like the guy he’s playing.

Though the news was released on April Fools’ Day, and certainly seems like it could be a joke, author of the post Jeff Sneider responded on Twitter regarding the legitimacy of the news.

Guys, do you REALLY think the top @Variety brass & my editors would let me post an APRIL FOOL’S DAY joke on the homepage? Uh… no.

As you can see, he doesn’t directly deny the news, as technically he could’ve still posted the April Fools’ Day joke on the homepage whether or not he was allowed, but I think this tweet is safe to say that not only is the news regarding Kutcher playing Jobs legit, but Sneider has now confirmed that Variety is uptight and wouldn’t allow an April Fools’ Day joke on the homepage.

The movie will start production in May, and will have some competition in Sony’s own Steve Jobs film, which is based off the Walter Isaacson book. Sony won’t have Kelso, though.