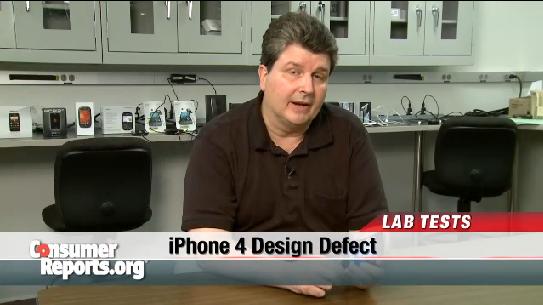 After rigorous testing in their secret underground laboratory, the product analysts at Consumer Reports ultimately decided that they could not in good conscience recommend the iPhone 4. In the end, a phone that you can’t hold doesn’t make for an effective means of communication, it turns out. For full info on that decision along with a handy (get it?) video that should help you fully grasp (get it?) the situation, click here.

Well, of course people are going to be talking about this on the Internet. But the one place they can’t talk about it is one of the places that makes the most sense: Apple’s support forums. According to several reports and an investigation by The Unofficial Apple Weblog, Apple has been deleting all threads that discuss the Consumer Reports review with any level of negativity toward Apple whatsoever. The final confirmation came from this Bing cache of one such thread, which you won’t be able to find if you look for it now. Instead, you’ll find this.

But don’t worry. It’s not like that’s the only thread anyone posted about this report. So just read about it here or here or here or here or here instead. Can no thread resist the Apple censorship onslaught? Also, couldn’t they have at least chosen a less patronizing error message than “Error: you do not have permission to view the requested forum or category.” Oh, well excuse me, I didn’t realize that a lowly consumer like me wasn’t allowed in your precious forum or category. I shall take my plebian status elsewhere to rant about your deficient product.

But Apple does this all the time. Back in 2007 people were talking about how they do it all the time, and they certainly haven’t lessened up over time. Still, doing so with a story that achieved this scale of national recognition is just stupid. It’s just going to make you look guiltier than you already did.