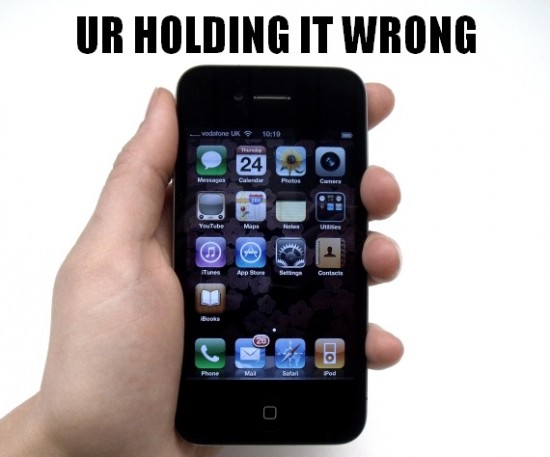 The engineers at Consumer Reports have fiddled with the iPhone 4 and, agreeing that there is a reception problem, have decided not to recommend Apple‘s newest smartphone. As reported early by users, the signal would significantly decrease upon touching a spot on the phone’s lower left side, to the point of being nonexistent in areas with weak reception.

According to the report, lab tests were conducted with three iPhone 4 models purchased from separate retailers in the New York area in “the controlled environment of CU’s radio frequency (RF) isolation chamber.”

In a room sealed off from outside radio signals, the phones were connected to a base-station emulator mimicking carrier cell towers. Having removed external factors, engineers still discovered the iPhone 4 suffered from a signal problem, which was not replicated by older AT&T iPhone 3GS and Palm Pre models also tested.

The test results throw into question Apple’s claim that due to faulty display software, the iPhone 4 frequently displays two more bars than actually exist based on available signal strength. The AT&T network may not be the primary culprit in this situation after all.

An affordable but ugly solution: Use a “thick, non-conductive material” such as duct tape to cover the antenna gap. The lab will be testing whether a case will also work in the upcoming weeks, but it is also expected to solve the signal problem. Consumer Reports says that they will not recommend the iPhone 4 unless Apple comes up with “a permanent—and free—fix for the antenna problem.”

Watch the Consumer Reports video below for more information: