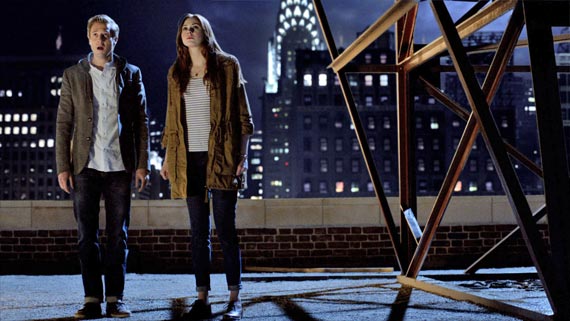 I feel like we’ve been talking about it for ages but last night it finally happened – Karen Gillan and Arthur Darvill played out their last episode of Doctor Who as Amy and Rory. Some might say it was emotional, some might say it was scary. My view? I’d say it falls somewhere in the realm of disappointing. A spoiler-filled review of “The Angels Take Manhattan” after the jump.

I’d been having issues with Season 7 the whole time. I knew Steven Moffat planned for these five episodes to stand on their own. I believe he actually said they could be more or less swapped around because there wasn’t an interconnecting thread, that each episode was its own epic story. And that was to its detriment in my mind. Fans complained Season 6 was confusing because of the centralized plot they kept revisiting, and I don’t necessarily disagree with that, but Season 7 was too far in the opposite direction. Nothing really felt important.

And I think that’s where my disappointment of Amy and Rory’s departure stems from. It didn’t feel important enough. They didn’t really save the world (though I suppose that could be argued), they saved themselves.

Of course they did. Why shouldn’t they? The Doctor didn’t have any genius ideas to save them this time. In fact, he was of the mind he couldn’t save them because of the Melody Malone book, written by River, which detailed this entire adventure. Which is strange considering River changed it pretty quickly. The Doctor was supposed to break her wrist according to the book but he didn’t – River did. So when Rory decided on a plan of action, a paradox that would kill the Weeping Angels, I knew it would work. But that was too easy. It would mean everyone lived happily ever after. At least on Angel survived the ordeal and shot Rory back in time again (we don’t know when), causing Amy to give herself over to the same fate in order to be with him. It was a snap decision, one that needed to be made quickly, and the right one for her character. Though I’m still a bit confused about why it had to be made.

The Doctor claimed they couldn’t use the TARDIS to go back and get Rory for worry of ripping New York apart, fixed points in time and all, but why? Amy’s thought wasn’t to prevent the Angel from taking Rory in the first place (which would cause another paradox) but to simply retrieve him from the past and be along their merry way. Perhaps I’m missing some of that wibbly wobbly stuff here but that bothered me. Don’t get me wrong, I knew the Ponds had to leave. I’m especially happy they lived a full life together and wasn’t wishing they would die some horrible, tragic death, but if they had to exit, I wish it had been on more undoable terms. Or at least on more important ones. I just can’t get it out of my head that their exit was, dare I say, boring?

I think back on the Doctor’s past companions since the series was relaunched in 2005. Rose left after a dramatic two-parter that had real implications for the universe at large. Martha chose to leave after another two-parter that affected the entire planet. Donna’s tenure ended on a similar note. Her work with the “Doctor’s Army” required a sacrifice she hadn’t planned on making but that helped them defeat the Daleks threatening the universe. I could tell at the time it was the end of an era not just for the creative team but for the Doctor’s companions. Technically, they all have the ability to show up down the road but you knew things were never going to be the same.

And they haven’t been. Matt Smith’s Doctor is very different and so are his companions. Not everyone agrees but I really liked Amy and Rory. I don’t think I had the same emotional connection to them as I had with the ones listed above but as far as this season is concerned, I think they got the short end of the stick for their farewell.

Was the episode scary? Sure, I found myself gasping at several bits, especially the first time we saw the oversized Weeping Angel mouth. Those cherubs weren’t anything to laugh at either. But I think a lot of you will agree with me the Weeping Angels effects have been minimized thanks to Moffat’s usage of them. I often wish he had left “Blink” alone.

Was the episode sad? Yes. I did cry a bit at the end but one thing that knocked it right out of me was the lack of time we got to really feel what happened. Much like the audience, it seemed as if the Doctor barely got a moment to really experience the pain of losing Amy. Knowing she was “alive” probably helped and I’m sure we’ll see the reverberations of this in the next half of the season but it seemed cut short. And Moffat seemed to play out his own forgetfulness through the Doctor. “Oh River, forgot you were standing there and also that those were your parents. My bad.” 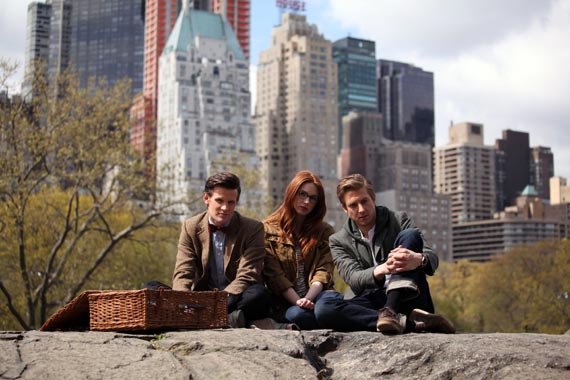 It didn’t help the emotional impact of the episode to have commercials breaking in at really inopportune moments on BBC America either. There was a message at the beginning of the show that said it was brought to us exclusively by AT&T or something, which led me to believe we might get the finale commercial free. That wasn’t the case, but I’d hope they consider it next time.

I’m not overly critical of Moffat, I’ve enjoyed most of his Doctor Who work and am certainly a fan of many of his other series, but he seemed to be having trouble finishing his thoughts this season. Much like the Doctor, Moffat is a man of clever ideas, but unlike the Doctor, he doesn’t quite execute them. “Asylum of the Daleks” was interesting but rushed through Amy and Rory’s relationship troubles. So much could have and should have been explored there but I finished that episode feeling positive because of the Daleks getting their memories wiped. “Dinosaurs on a Spaceship” was the most fun but also skimmed over a great deal, especially the Silurian plot thread that was the basis for the entire episode. I will likely never watch “A Town Called Mercy” again. Why? Besides it not being all that great to begin with, the Doctor used a gun to threaten someone. No one in the show thought it was a big deal and it was never addressed after the fact. The Doctor doesn’t like guns and rarely in his history has he actually pointed one at a character. If you’re going to change that, change it with good reason and make it a specific talking point. Don’t do it and pretend it didn’t happen.

And finally, “The Power of Three” had the most potential to be a classic, epic, Who adventure and completely dropped the ball. Or cube, as the case may be. This episode certainly should have been a two-parter if the finale wasn’t. The Doctor spent a great deal of time on Earth with the Ponds and all we saw was him being really, really bored. They discovered the source of the cubes very late in the episode, treated the mysterious character as if he was someone we should know, and then summarily left several humans on board the ship to die as it blew up after the quickly jumpstarted millions of hearts on Earth (that had been dead for quite a while, I might add). It had a heartwarming Brigadier connection though, so there’s that.

But back to the episode at hand. The more I think about “The Angels Take Manhattan,” the more disappointed I get. I’ve explained pretty much why but there’s still something unsaid nagging at the back of my brain about it and I’m not sure if I’ll ever figure it out. Perhaps it’s because there’s plot holes in every corner. There’s at least one thing that makes me happy. A few months ago I accidentally drove onto the set of this episode filming in Manhattan. I knew they were filming in NYC at that time but had no intention on seeking out the locations. Having lived in the New York area my entire life, I found myself embarrassed when I hit a dead end trying to get to the FDR Drive. When I turned the corner I realized I was on the set of this episode, hundreds of Whovians on the sidewalk waiting to catch a glimpse of the stars and all. It was utterly surreal and I’ll never forget it. Much like I’ll never forget the Ponds. Even if they went out with a whimper.