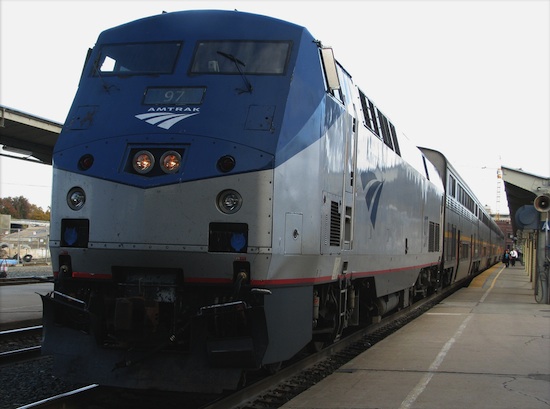 If you’ve been on an Amtrak train in the past 40-odd years, you know the routine. Have your ticket out, wait for the conductor to come and use his hole punch on it before placing it above your seat. That will all be changing soon, as the government-owned rail corporation prepares to roll out iPhone-based electronic ticketing across its routes.

The electronic ticketing system has been in the works for a while now, and been tested on the Boston to Portland route, as well as the San Jose to Sacramento routes. It’s remarkably straightforward: The conductor uses a standard iPhone in a specialized case with an extra battery and a barcode reader. Passengers present the conductor with either a printed ticket from a ticket agent, a ticket they printed at home, or a digital ticket on their smartphone. The conductor scans the barcode and moves to the next passenger.

Unlike the old hole-punch method, this gives greater flexibility to both the conductor and passenger. The conductor now has precise information about how the train is filling up, and can direct passengers to empty seats as they come on board. The special conductor’s app also allows the conductor to communicate easily with other staff members on the train to better coordinate operations.

For passengers, they can now change their ticket mid-trip, which previously required either paying the conductor in cash or getting off, purchasing a new ticket, and waiting for the next train. It also, obviously, does away with the hassle of having to print a ticket at all.

According to The New York Times, 1,700 Amtrak conductors will be using the digital check-in system beginning in late summer. The Times also reports that the system has cost a total of $7.5 million, with $5.5 million for development and $2 million to purchase the iPhones and scanners. That might seem like an awful lot, but the apps high ratings show that the money was at least spent better than other government-funded apps we could mention.

Currently, the eTicketing scheme is iPhone-only, though Amtrak will be adding support for Android in the near future. For those people with unsupported phones, some of the functionality can be accessed through Amtrak’s mobile site. The app is currently available for free in the Apple app store, and claims to support eTicketing on five routes across the country:

Though passenger rail has remained on the back-burner for years, rising fuel prices and the hassle of post-9/11 air travel have made some travelers give rail a go. By incorporating a frictionless purchase a check-in system that takes advantage of devices customers already own, train travel only seems more attractive. Now if only we could get some high-speed rail and more dedicated passenger track to go with that slick app.